Sandra Higgins recently debated the difference between animal rights and animal welfare with TD and farmer Michael Fitzmaurice on Ireland AM. The debate took place in the wake of Irish Taoiseach Leo Varadkar’s statement on personal reduction of animal flesh for health and climate change reasons, a statement that has caused outrage among the Irish farming bodies, and one which was supported by the publication of the Lancet report on diet, climate change, world hunger and human health.

Animal Welfare is a set of guidelines by which other animals are bred to be killed. The guidelines prescribe the minimum standards by which other animals can be mutilated, confined, artificially inseminated, taken from their mothers, transported to a slaughterhouse and killed. The guidelines exist to ensure that the animals keep lactating, ovulating, and gaining muscle tissue to be used as human food (dairy, eggs and animal flesh or fish). This maximises profit for the dairy, egg and animal flesh and fish industries, and in turn for the industries that use wool, leather, feathers, and fat in clothing, furniture, cosmetics etc.

Animal welfare guidelines have evolved from the recognition of the science of sentience and consciousness. Other animals have the same senses as humans (sight, hearing, taste, touch, smell). In fact, their senses are often more powerful and more complex than ours, and some species have senses that we do not possess. They also have brains that enable them to perceive and interpret information, retain memories and anticipate the future. Although human study of animal sentience and consciousness is hampered by the limitations of our own capacity to assess and measure, we have sufficient evidence to conclude that we are not the only species capable of physical and psychological feelings: other animals can also feel. They are aware of themselves and their worlds and they have interests, particularly an interest in avoiding harm and pain, and an interest in staying alive.

Few people doubt that the cats and dogs with whom they share their home are sentient. But they conveniently forget that the sheep, cows, pigs, chickens, turkeys, fishes, rats and mice, and other animals we use as food, clothing, research and education, are no different to those cats and dogs. In fact, in the most salient and fundamental ways that matter, they are not very different to us.

Therefore, they share our fundamental right not to be owned, exploited and killed.

Animal Rights Is about Morality: Not Money

Go Vegan World advocates for these rights for other animals because their rights matter to us. They matter to us primarily for the sake of the animals we advocate for, but also for the intersectional issues of human and environmental wellbeing. Those who repeatedly refer to the cost of our advertising budget (which is entirely dependent on donations and is minute in comparison to the advertising budget of the industries we are attempting to stop), are merely deflecting from the moral responsibility of us all to stop using other animals and instead transition to a plant based economy that respects both human and animal life, and the planet that we depend on to sustain us.

Because other animals are the legal property of their human owners, the value of their lives is only measured in terms of monetary gain to the animal use industries. The most important aspects of their lives such as their relationship with their mother or child, their capacity to engage in meaningful, self-determined, purposeful behaviour; their ability to flee from harm; and the opportunity to live to the end of their natural lives, are all disregarded in favour of maximising profit from them with the least possible input.

Why Animal Welfare is Irrelevant

When someone is bred to be exploited and killed, reference to how well their owners care for them in order to maximise profits is irrelevant.

Where the only recognised value of a life is not to the being living that life but to the one who owns and profits from them, reference to the welfare standards of their living circumstances is a poor attempt to justify the indefensible fact that their rights are not respected.

Debating Animal Rights on Ireland AM

TD and farmer Michael Fitzmaurice, recently debated veganism and animal rights with Go Vegan World Founder and Director, Sandra Higgins on Ireland AM.  Like most farmers, Michael referred to animal welfare standards in Ireland as justification for the unnecessary and unfair use of other animals by humans. He exhibited the characteristic failure of farmers to understand that animal rights activists do not condemn the use of other animals because we lack knowledge of the processes by which animals are farmed, used and killed. It is precisely because we understand it that we know how unjust it is.

Contrary to what Michael states in the debate, farmers do not ‘have to’ impregnate cows: they impregnate them so that they can take the milk they produce for their calves and sell it for profit to humans who do not need it. The vast majority of the population pay them to do so every time they purchase dairy products.

The irony of Michael’s comparison of the space in live transport vehicles that ship animals to their deaths, to that in planes used by humans, beggars belief.

Michael attempted to paint a picture of heroic farmers who take orphaned lambs into their kitchens to bottle feed and keep alive. He failed to mention that this effort is entirely profit-driven. It is not commendable for a farmer to care for a vulnerable baby of any species, allow that baby to imprint on them in such a manner that he or she becomes attached to, relates to, and trusts the farmer as if he were their mother, and then betray the trust of that animal by sending them to slaughter for profit. In fact it is nothing short of tragic.

That is why Go Vegan World runs ads that state They Trust Us: We Butcher Them. 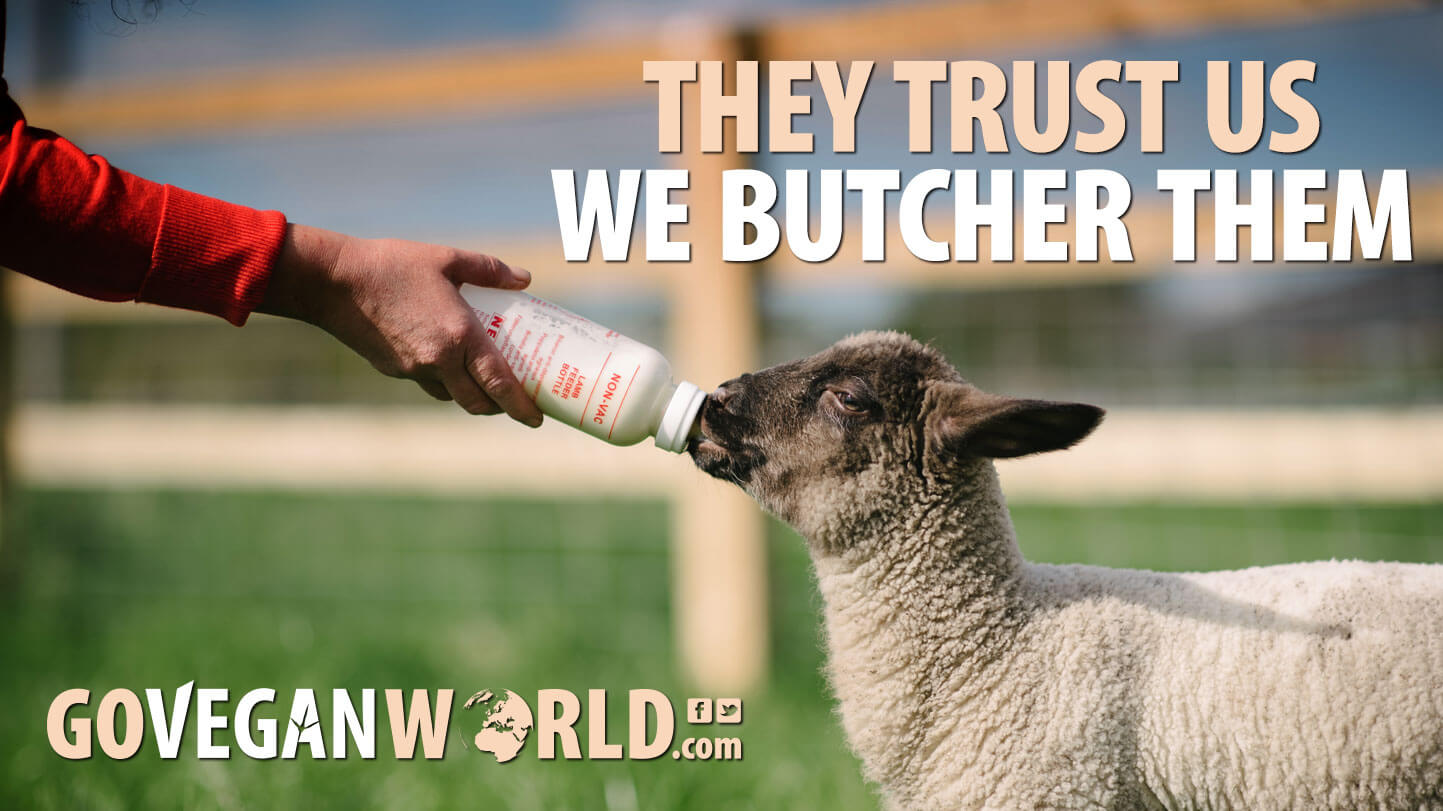 We run those ads to remind the public that the animals they use are not ‘something’; they are someone who can feel; someone who doesn’t want to die.

We run those ads to educate the public that animal use is unnecessary and that there is a plant or vegan alternative to every animal use.

We run those ads to encourage individual members of the public to stop creating a demand for this tragedy and to stop paying farmers to do a job that they themselves would find difficult if not impossible.

Go Vegan World is not anti-farmer. We want to work with farmers to develop a plant-based economy and we are wondering when the farming community will stop fighting with us and work with us for a better way of life for everyone.

The programme can be seen here.