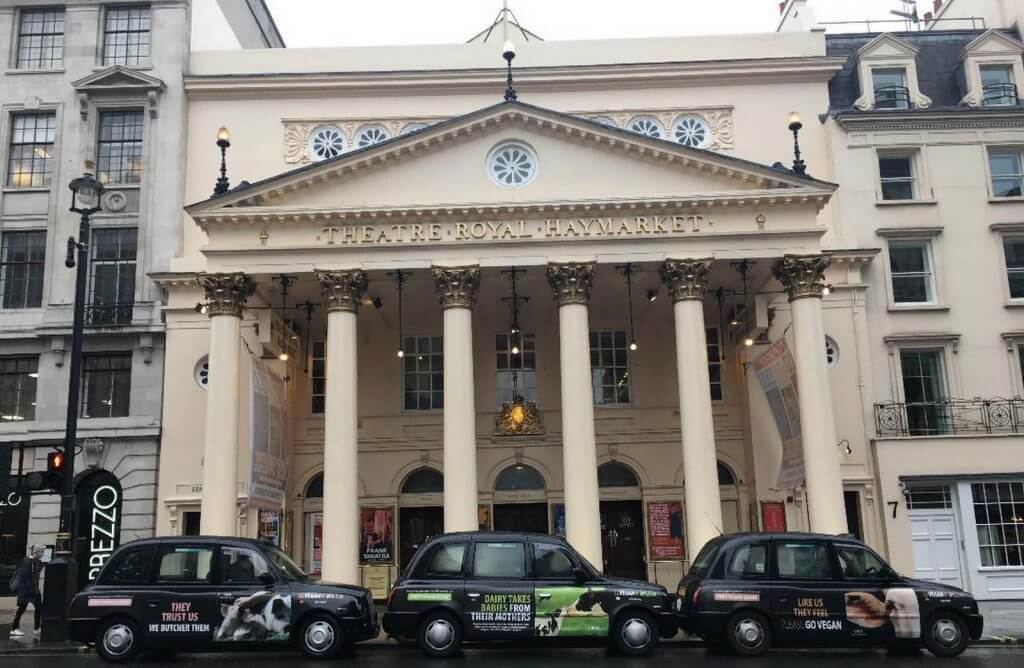 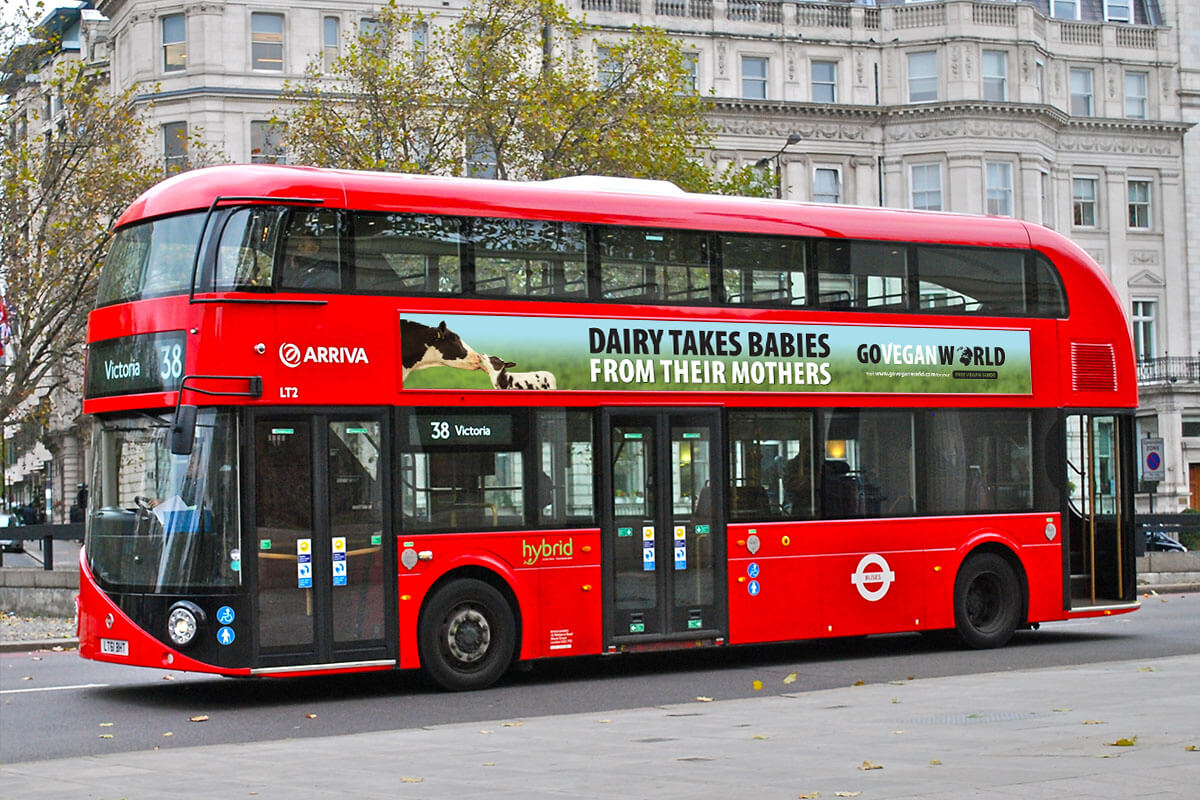 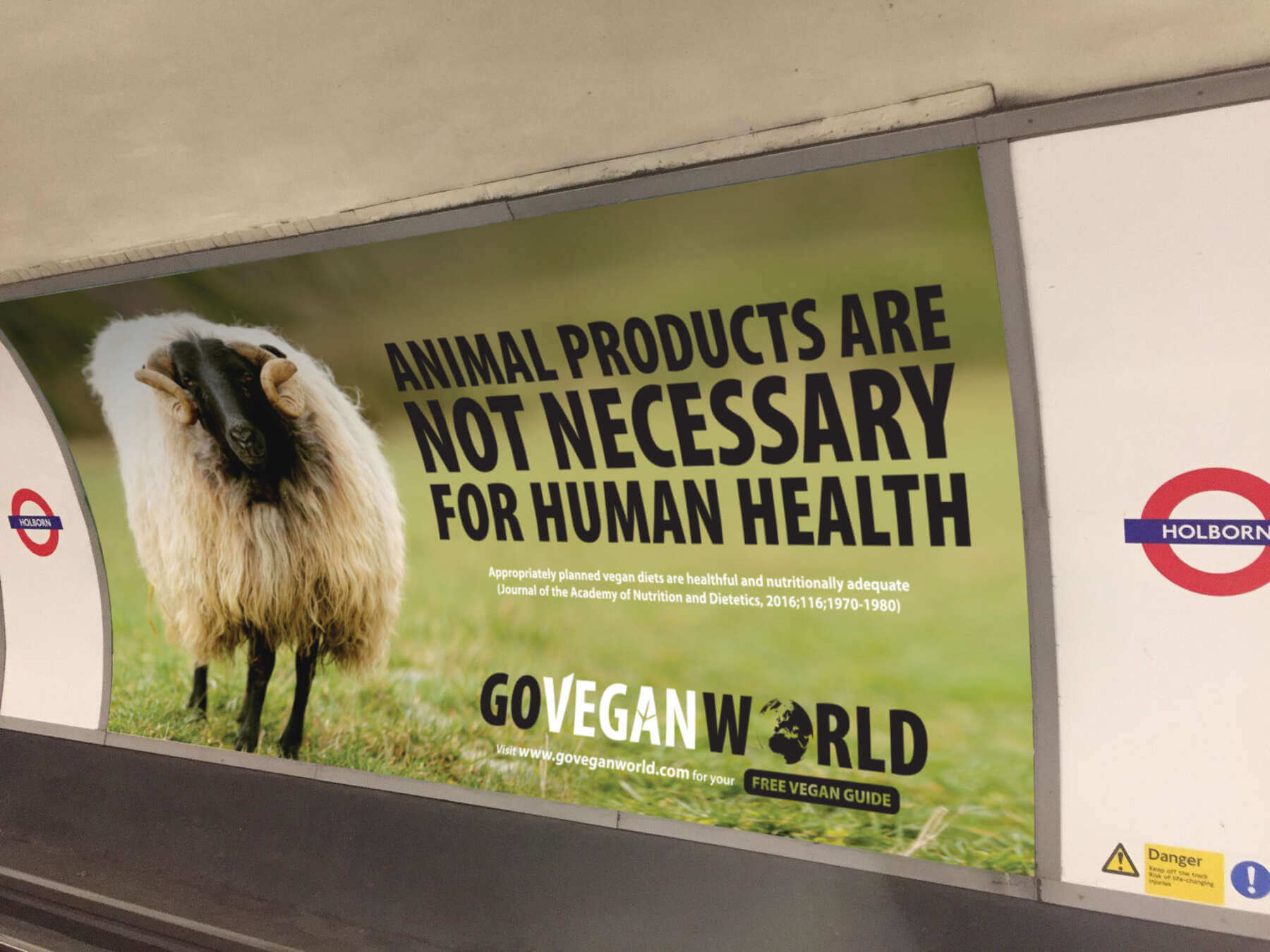 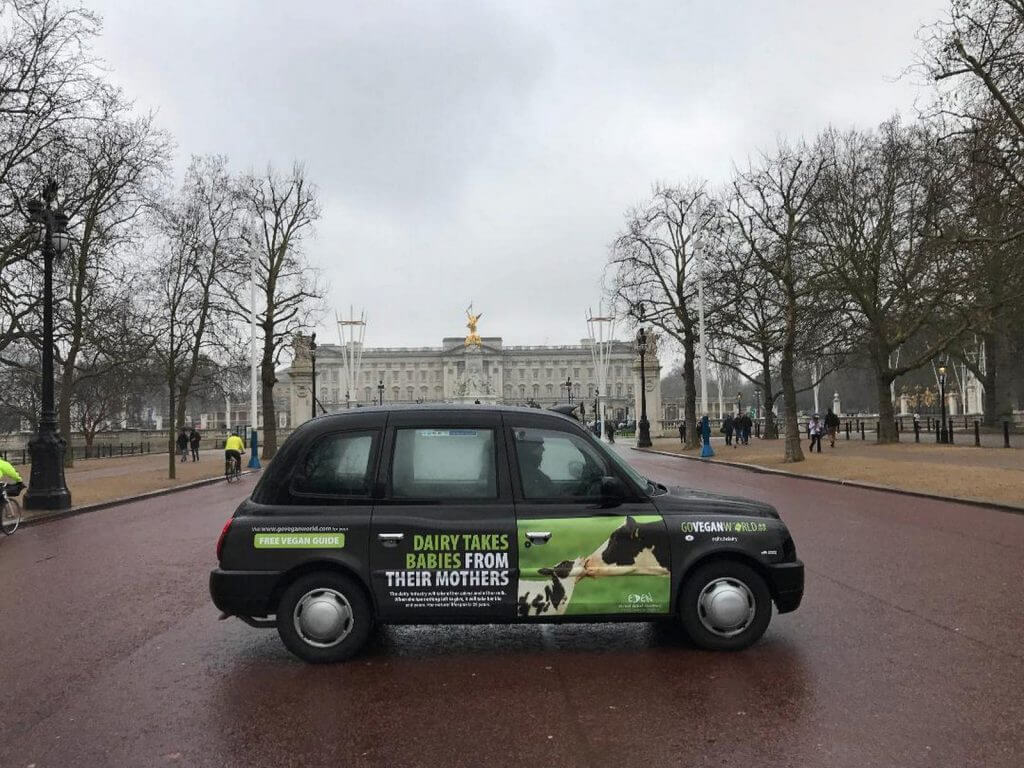 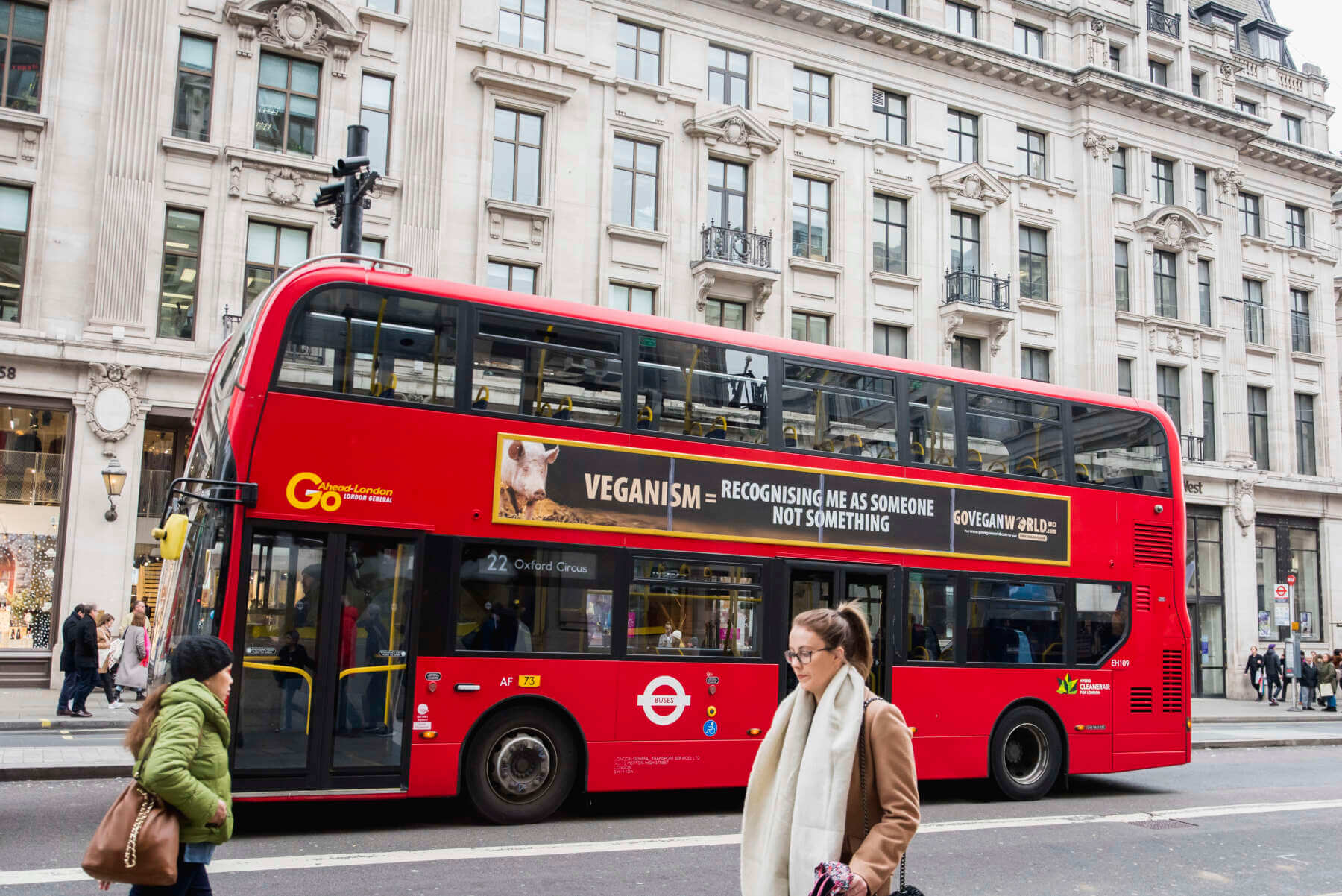 Go Vegan World is a Public Educational Advertising Campaign that exists to educate the public about animal rights, promote veganism, and challenge the legal status of other animals as human property. It is animal focused in nature and seeks complete cessation of animal use by humans. The first of its kind in Europe, it was launched in Ireland in 2015, in the UK in 2016 and has since been active in Canada and maintains a constant presence on social media.

In celebration of World Vegan Month 2015, vegan advertising appeared in public throughout Ireland. The campaign was successful in its aim of highlighting the unjust exploitation inherent in our use of other animals in Ireland. In 2016 it expanded to other countries. It is the largest and most significant public vegan advertising campaign to have been present throughout Ireland and most parts of the UK.

If you asked most people if they think it is wrong to unnecessarily harm other sentient beings, they would answer that it is. This is because we all know that other animals feel. They have the capacity to experience pleasure and are harmed when we deprive them of the opportunity to do so. They experience physical and psychological pain when we hurt them. Like us, they have an interest in continuing their lives and do not want to die. Therefore, most people already hold the values that underpin veganism. Socio-cultural inheritance of animal use along with careful deception by the industries that profit from it, combine to enable us to behave in ways that are inconsistent with our deeply held ethical beliefs and values.

The aim of Go Vegan World is to expose this inconsistency between our values and our behaviour. We claim to respect fact; yet we live according to myth. We claim, as humans, to be humane, courageous and open minded, yet we refuse to look at the consequences for others of how we live our lives. As a result, our everyday lifestyle choices about what we eat for dinner, wear to work, or do in our leisure time, destroy them individual by individual, in their trillions, year after year. The Go Vegan World campaign aims to bring to light the processes involved in bringing a sentient being into this life, through their objectification in laboratories, zoos, circuses, and farms, into the slaughterhouse and back out as the commodities we use. These are the processes that we are responsible for, that we pay for, every time we make a choice that is not vegan. The campaign calls on every individual human to acknowledge their ethical obligation to other animals, and it promotes ethical veganism as the only way of living a life that is fair, decent and civilised.

Its aim is not for people to cause less harm. It asks them to stop harming others.

Its aim is not better treatment of the other animals we use. It asks that we stop breeding them for our use at all.

Its aim is not for people to go vegan in their own time. It asks for them to go vegan now.

Its aim is to be part of the solution so that everyone is enabled to go vegan regardless of demographics, employment, or any other obstacle that they believe prevents them from being vegan.

Finally, the campaign aims to let the animals be the spokespersons for their rights by their strong public presence for the duration of the campaign in our daily lives.

Go Vegan World Launches in Ireland and the UK

Go Vegan World launched in June 2016 in Ireland, the country of its birthplace. It is dedicated to the memory of Matilda. It launched in the summer of 2016 in the UK.

This new campaign repeats the focus of the Go Vegan Ireland campaign by illustrating the sentience of individuals. It brings those individuals right from the heart of the animal agricultural, research, clothing, and entertainment industries, into the streets, where they confront us with who they are and the injustice of our use of them. It returns their voices to them, giving them the opportunity, as capable, sentient persons, to look at the viewer and ask for what they need from us (for us to go vegan). The campaign repeats the theme of the harm we cause them by our consumption of dairy and eggs, as well as the injustice of our objectification of them in all our unnecessary use of them. It features several interrelated themes that aim to dispel the myths that enable our commodification of other sentient lives. In particular, the campaign challenges our ignorance of their sentience and equality, the deception of acceptable use, and the myth that any animal use is necessary. There is a strong emphasis on the preciousness of life to the bearer of that life. This campaign aims to reflect the truth of the consequences for them of our non-vegan lifestyle values and choices, casting a light into the hidden, dark world of human predation on defenceless others. It presents information to the public that counters socio-cultural acceptance of speciesism and offers veganism as a just alternative.

May it bring us closer to animal equality and a vegan world.

This international campaign is inspired by my work as Founder and Director of Ireland’s first vegan sanctuary, Eden Farmed Animal Sanctuary. The residents at Eden, some of whom appear in the campaign, taught me about the personhood of other animals and the atrocity we have perpetrated on them by our use of them. It is surely the greatest tragedy this world has ever witnessed. Everyone needs to know about it.

Since I opened the sanctuary in 2008 I have been humbled by the character, personality, complexity, sophistication and courage of the individuals who have lived here. I have come to understand that they live for their own reasons, not ours, and that our objectification of them is utterly unjust. I witness how they treasure every day of their lives and I am heartbroken on their behalf that we take those lives from them before their natural end. I am appalled by the harm we inflict on them by our use of them. I am horrified by the hidden nature of this harm. Everyone needs to know about it. It is my hope that this campaign will bring public awareness to the truth of how they live and how they die.

I have seen the light go out of too many eyes. Every one of them struggles to hold onto their precious only life, right until their last breath. A vegan world is only the starting point; our goal must be their freedom from us.

The Conversation on Deer Culling is a Diversionary Tactic: PJ Coogan chats to Sandra Higgins about Veganism and Animal Rights on Cork 96 FM

This project has evolved through a collaborative and supportive network of some of the most generous, courageous people I know. They include, but are not limited to the following, to whom I extend my deepest appreciation and gratitude:
Chris Copeland Photography & Agatha Kisiel Photography for their representation of the residents at Eden Farmed Animal Sanctuary; Jack T (Trzewiczek) for his passion, clear sightedness, and collaboration on the campaign design and management; Linda Clark and Bronwyn Slater for proof-reading and editing; Ronnie and Sany for their care of Eden so that I could give my time to this project; those whose generosity and belief in a vegan future funded the campaign, and those present in the campaign photographs: Colleen McIvor, Agatha Kisiel, Charlotte, Frank, Annie, Justin, Emily, George, Ally, Connie, PJ and the other animals in the photographs whose names are not known to us.