The Irish Farmers Association (IFA) has sent a news release to all its members* and to the Irish media, attempting to malign Eden Farmed Animal Sanctuary because it cannot deny the truth of the Go Vegan World campaign that we run. Despite public statements of pride in their work, they are ashamed that we have brought to public attention that it is wrong to use other animals and to create a demand for the violence we inflict on them. Instead of facing up to the facts we are making public about the violation of animal rights upon which animal agriculture is predicated, as well the links between animal agriculture and the climate disaster and environmental destruction, they attempt to discredit us. Of note, their letter to members attempts to persuade farmers that animal agriculture should continue and that reports such as Channel 4’s documentary ‘Apocalypse Cow: How Meat Killed the Planet‘ are merely motivated profit and not something to be taken seriously.

Bear in mind that at the time of writing, viewers around the world are subject to harrowing images of bushfires raging through the homes and lives of humans, wild animals and farmed animals throughout Australia; bushfires that are signficantly attributable to animal agriculture and the consumption of animal products.

IFA Attempts to Discredit and Bully Us into Silence 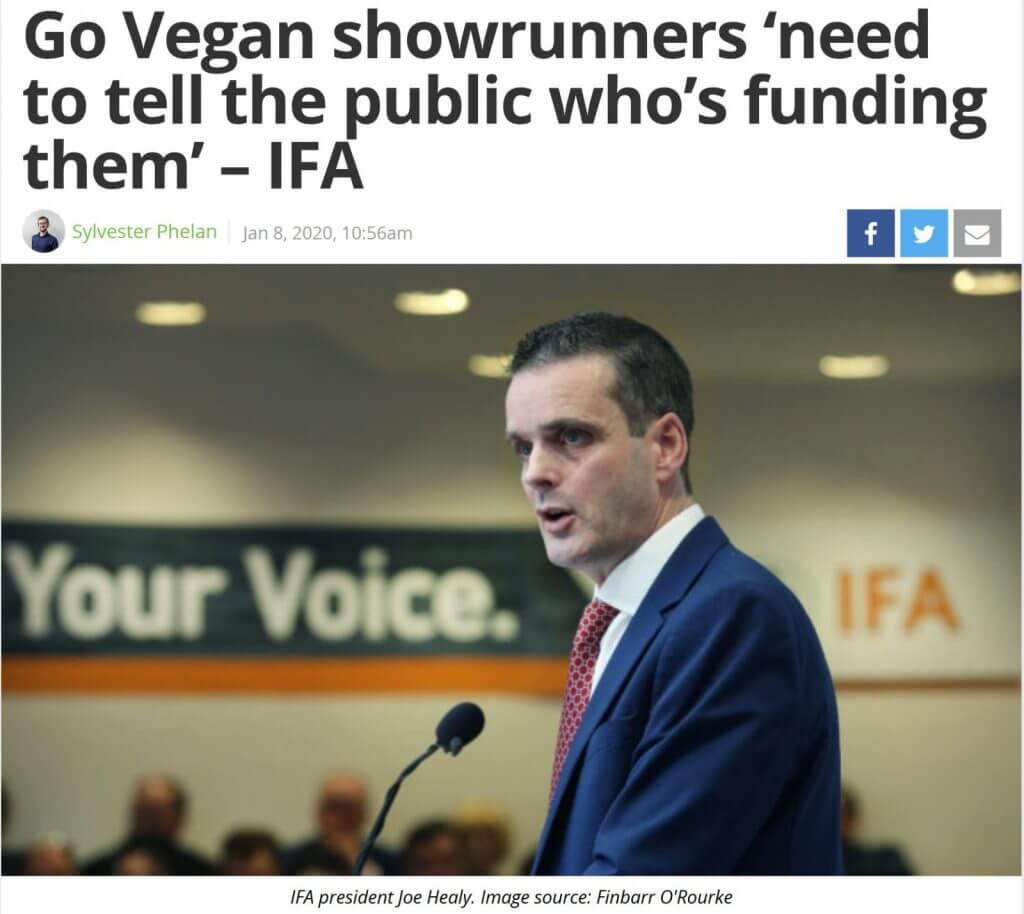 The IFA insinuate that donations made to our animal rights and vegan educational work are motivated by profit. This is untrue. We accept donations from those who share the objectives of our campaign to rapidly and completely abolish all human use of other animals.

The activities of Eden Farmed Animal Sanctuary and Go Vegan World pertain to animal rights and dismantling the legal property status of other animals. These activities do not fit within the definition of a charitable organisation in the Republic of Ireland, which only accepts animal welfare as a charitable activity. We are opposed to animal welfare which is an industry term that refers to how we treat other animals as we exploit them, a term that governs the deliberate breeding of sentient animals so that they can be used and killed for profit and has nothing whatsoever to do with their rights.

Both Eden and Go Vegan World are small, non-profit companies and we publish full accounts in accordance with the regulations. Neither company publishes the names of its donors. This is in keeping with GDPR and out of respect for donors’ wishes. The identity of our donors is irrelevant to our work which highlights that other animals, in all parts of the world, feel and value their lives and, as a result, have the right not to be regarded as ‘food’ or resources, and have the right not to be exploited or killed.

In our culture where everything has a monetary value, it is difficult to conceive of a purely altruistic motive. Yet, concern for animal rights without public credit, is exactly the motive of those funding Go Vegan World and Eden Farmed Animal Sanctuary. Our donors support us because they share our moral conviction that it is wrong to use and kill other animals and, like us, they want to see an end to all human use of other animals.

Each public advertisement published on behalf of public bodies is funded through taxpayer’s lawfully paid taxes. It would not occur to anyone to inquire as to the identities of the persons and individuals that paid such taxes. Each public company that advertises has shareholders. Nobody would suggest that its shareholders should be identified in authentication of their advertisements.

Go Vegan World considers that questions which seek to intrude on the legitimate privacy rights of its donors are intended to deflect attention from the animal rights message we communicate through our advertising and educational work. The IFA strategy is to kill the messenger rather than debate the message.

That the IFA attack us in this manner demonstrates that they cannot address the moral issue of animal use and they are afraid of our campaign. Since Go Vegan World opened in Ireland more than four years ago, there has been a sea change in public understanding of veganism and an awakening that other animals have rights. There has been a concomitant increase in the demand for plant-based replacements for animal products. These replacements are not necessary for vegans to live according to the belief that it is wrong to use other animals, but they make life very convenient for many people. These replacements should not be seen as a threat to farmers. They are a threat to animal agriculture but they are not a threat to the sustainability and future of farmers who can earn a good living in a plant based economy.

We would be happy to discuss the future and wellbeing of IFA farmer members with the IFA. We would be interested in asking them how they intend looking after their farmers when animal agriculture collapses, as it inevitably will, as an increasing number of people realise that it is predicated upon the violation of animals’ rights, and as more and more people make the connection between the climate disaster and animal agriculture. We would be interested in asking them what measures they are putting in place to help farmers who are suffering from mental health issues as a result of work which involves exploiting, harming and killing animals. We would also like to take the opportunity to let IFA members know that Go Vegan World is willing to assist, in any possible way, to help farmers transition from animal agriculture to an alternative, sustainable and ethical way of making a living

Farming continues to be in the spotlight when it comes to climate action. This looks set to continue in 2020, with the Government this week publishing a draft new climate bill.

You may be aware that Channel 4 is planning to broadcast a programme called ‘Apocalypse Cow: How Meat Killed the Planet’ at 10.00pm tonight. In October 2019, Channel 4 became a significant investor in a plant-based start up company.Programmes like this are incredibly frustrating for Irish farmers, who are working hard to provide people with safe, sustainable and nutritious food. This type of biased content, marketed as public interest viewing, is just the most recent example of the challenge traditional farmers face when competing with huge corporations marketing highly-processed foods under a “climate-friendly” label.

Closer to home, today IFA has called on Eden Animal Sanctuary, which funds expensive advertisements around Ireland and the UK as part of the Go Vegan World campaign, to come clean on where its money comes from. This ‘Sanctuary’ is a company limited by guarantee, it does not have charitable status and therefore is not subject to charity regulations. The way the company is structured also avoids the regulations around the need to publish audited annual accounts.

It’s important that everybody in the sector works together to engage with consumers about the work we do and the food we produce. To assist you in this, below are a number of key facts about Irish meat and dairy production, in order to be better prepared to tackle misinformation if, and when it’s put to you, either in person or on social media.

More useful facts can be found here and here.I would also encourage you to watch this short video which highlights the work that Irish farmers are doing in this space.

Finally, I am pleased to let you know, as part of our ongoing efforts to rebalance this debate, IFA is hosting an important half-day event targeted at policymakers and the media featuring one of the foremost experts in the world on the important role of farming in the climate debate, Dr. Frank Mitloehner from UC Davis.

We will be sharing the key outcomes and learnings from this event with our members.