In a landmark decision the Advertising Standards Authority (“ASA”) has ruled in favour of the Go Vegan World campaign, finding that our ad that lets people know that dairy is inherently inhumane is not misleading. This independent, official finding that our ad has been objectively substantiated with supporting evidence is hugely significant for the campaign and for animal rights.

The ASA investigation was instigated by seven complainants, some with “experience of working in the dairy industry”, following the publication of the ad in the Sunday Telegraph in February last.

Featuring a photo of a cow behind a length of barbed wire, the headline states: “Humane milk is a myth. Don’t buy it”. Below, in smaller text is the following quote:

“I went vegan the day I visited a dairy. The mothers, still bloody from birth, searched and called frantically for their babies. Their daughters, fresh from their mothers’ wombs but separated from them, trembled and cried piteously, drinking milk from rubber teats on the wall instead of their mothers’ nurturing bodies. All because humans take their milk. Their sons are slaughtered for their flesh and they themselves are slaughtered at 6 years. Their natural lifespan is 25 years. I could no longer participate in that. Can you?”

The Complainants challenged the claim that “Humane milk is a myth” and the references to “The mothers, still bloody from birth” and “their daughters, fresh from their mothers’ wombs, but separated from them.” They claimed that these statements would mislead readers. They further claimed that the ads suggested that there were widespread breaches of the UK welfare regulations in dairy farming.

“The aim of the ad is to let people know that no matter where the milk and dairy products they purchase have come from, whether an industrial-scale dairy farm or a smallholding, for each cow, legal, standard practice necessitates her pregnancy, the removal of her calf, and her slaughter, so that we can drink the milk that she produced to feed her infant. The ad highlights that the problem faced by animals in the dairy industry is not how they are treated, but that they are used at all.

The ad pertains to animal rights: the right of other feeling beings not to be our property and not to be used by us for our ends.”

Go Vegan World substantiated all their claims, submitting several scientific papers to the ASA as evidence. The ASA accepted that calves are indeed taken from their mothers soon after birth, and ruled that the Go Vegan World statement that “Humane milk is a myth” was not misleading.

The Go Vegan World submission to the ASA included evidence to support the claim that removal of calves from their mothers very soon after birth is standard practice in the dairy industry. The DEFRA recommendations are that calves should not be removed earlier than 12 hours after birth and preferably not sooner than 24 hours after birth. Far from implying breaches in welfare legislation with respect to the timing of separation, Higgins points out that the timing of the separation is irrelevant to the ad, which comments on the injustice of using cows for their milk at all, especially the injustice of separating mother and child. She clarifies:

These studies show that the bond between mammals and their offspring used by the dairy industry occurs very quickly after birth and that separation, even at 12 to 24 hours, as recommended in the UK welfare guidelines, causes psychological distress to calves and their mothers. The effects are not restricted to short term-observable behaviours: they have long term consequences for calves’ future ability to cope with stress and their ability to socialise. The effects of separation on calves are comparable to the effects of maternal deprivation in humans

‘Bloody from birth’, ‘fresh from their mothers’ wombs’

The ad described the scene that was witnessed by the individual who visited a dairy farm, seeing mothers still bloody from birth and young animals fresh from their mothers’ wombs. Submitted evidence confirmed that cows, like all mammals, are bloody for several weeks following the birth of their calves. Evidence further confirmed that a mammal who has given birth within the previous 24 hours is still ‘bloody from birth’, while their offspring at only 12-24 hours old are still ‘fresh from their mothers’ wombs’. They are defenceless, helpless and they require the presence of their mothers for their psychological security and development. If any other mammal such as a puppy, kitten, monkey or human were taken from his or her mother within the first 12 to 24 hours we would find it completely unacceptable.

Go Vegan World also referred to the fact that farmers are routinely warned to be vigilant when working with cows who have recently given birth, particularly when removing calves from their mothers. Cows who have just given birth present one of the most serious risks to the health and safety of farmers precisely because the mother-child bond is so great that cows will do anything they can to protect their children.

The ad does not attempt to address every aspect of the use of mammals in the dairy industry. Even if calves were left with their mothers for their entire lives, milk could not be considered humane because it is predicated on exploitation. Most people are unaware that most animals used in the dairy industry are artificially inseminated, a practice that many would find objectionable. Neither are most people aware that they are selectively bred to maximise the production of milk. Selective breeding and the stress of continual lactation and pregnancy result in stress for all animals used in the dairy industry. A plethora of research papers on the metabolic stress that results from their use in the production of dairy further supports the statement that milk is not humane. They have to contend with annual pregnancy, almost year-long lactation, and lactation during several months of their pregnancy. This results in enormous physiological stress attributable to the human demand for their milk.

The perception of most people is that cows and other mammals used for dairy automatically produce milk. They assume that farmers do them a favour by relieving them of that milk. Most people are not aware that in order to lactate, a cow (like all mammals), must first be impregnated, carry a calf for nine months, and then give birth. In order for us to drink the milk the cow produces for that calf, it is standard practice for male and female calves to be removed from their mothers. If male, the calves are reared apart from their mothers for their flesh and killed at an early age (some of them are killed at birth), and if female they will be used in the same way as their mothers, repeatedly impregnated, their calves removed from them and their milk taken in order that we can drink it. After a few years the cow’s milk production declines and she will also be killed. All of this is standard practice in the dairy industry rendering the production of milk for human consumption to be inherently inhumane, hence the assertion in the ad that “humane milk is a myth”. It is a public right to know about these practices so that people can make an informed choice about how they live.

The Go Vegan World ad has been found to have been objectively substantiated with supporting evidence. Whilst Go Vegan World has been vindicated, it must be noted that some involved in the dairy industry have attempted to have the ad withdrawn, thereby preventing people from learning the truth. If they think the industry they are involved in is fair or humane, why do they try to silence us? Many dairy farmers are deeply troubled by the injustice they have to inflict on animals in order to sell their milk. Go Vegan World encourages them to get in touch so that we can help them to find an alternative that does not involve animal exploitation.

The campaign is not restricted to revealing the truth about the dairy industry. Go Vegan World campaigns for an end to all animal use by humans and its ads and educational material pertain to every type of animal use. We hope that this finding by the ASA will reassure those media outlets that have previously discriminated against GVW by refusing to publish our material whilst carrying industry-funded advertising. But most of all, we are hopeful that this ruling will encourage people to research more of our work and become more critical in their examination of the products that are sold to us as if they were beneficial and harmless when in fact they are unnecessary, unjust and inhumane.

Alleges that the ad contained misleading claims that could not be substantiated, and that it implied breaches of welfare regulations. Complaint 2017-05-09 TU8 Adv

Rules in favour of Go Vegan World and declares the ad to be true, substantiated, and pertinent to animal rights rather than the welfare guidelines of an inherently exploitative industry. 2017-07-07 Final ruling 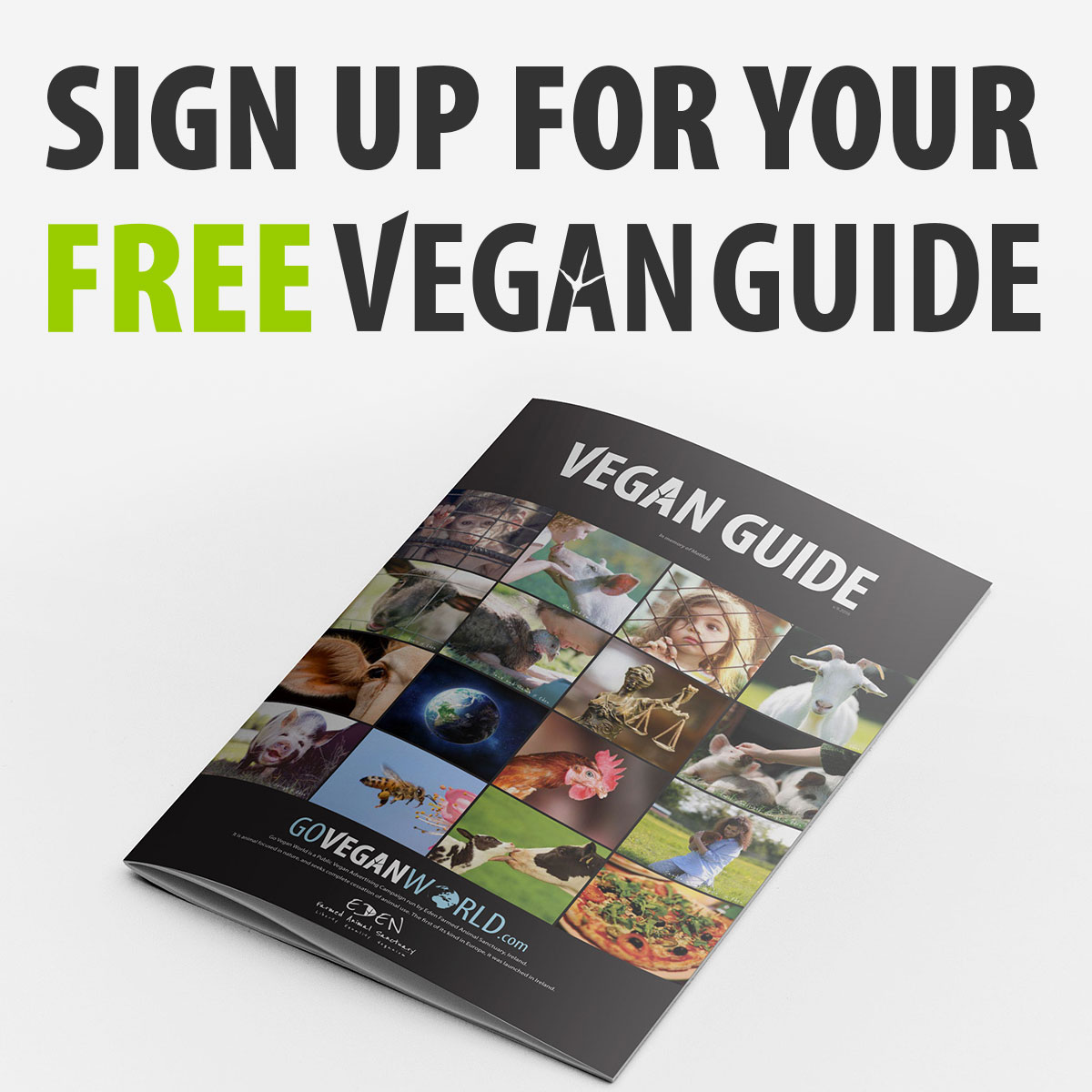