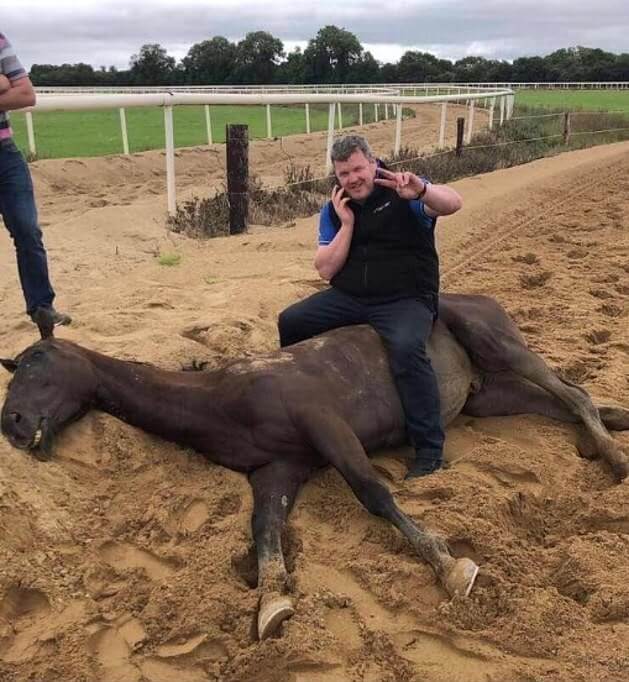 The photograph of horse trainer, Gordon Elliot, sitting on a horse who had just died has prompted much discussion about our use of other animals. Within days a video was released showing jockey Rob James, also sitting on a dead horse who had suffered a heart attack while being trained.

Media reports describe the incidents as “crass, distasteful, insensitive, indefensible and hugely stupid” (e.g. Mark Costello, The Irish Field, 02.03.2021 and Brian O’Connor, Irish Times, 03.03.2021). Stupid? Because they were caught in acts that are emblematic of the disrespect with which we regard the animals we routinely exploit. Or because of the potential damage to their careers and the industry?

It is interesting to note the public reaction to these events. Most people are outraged and upset. Members of the public have telephoned radio stations and commented on social media about their sleep disturbance, tears, and anger at seeing another animal so disrespected. The conversation has prompted discussion of other very obvious concerns such as using whips to urge horses to run faster. This is very obvious to anyone who has ever watched a race. Less obvious to those who are not familiar with how horses are exploited, are the spurs and the use of human heels on a very sensitive part of the horses’ bodies, or the bit in their mouth that presses painfully so that the rider can control their every move. It is that control and domination that takes place in plain sight that is the most obnoxious and yet is socially and culturally sanctioned. It is understandable that people are outraged at the disrespect shown to horses who have died but it is not rational. Surely the outrage should be about the fact that while they were alive and capable of feeling they were trained and raced until their legs broke or they suffered a heart attack. We should be outraged that they were exploited, injured and died as a result of being forced to entertain humans and profit the horse racing industry.

Few people ever think about the term ‘breaking a horse’ even though everyone knows that it is a terrible thing to break the spirit of another being, regardless of species. Breaking a horse means that humans use their power, by whatever means, to dismantle and eradicate both the horses’ natural instinct of fear that preserves life, as well as their personality, in order that they submit to a human climbing onto them to dictate their every move. Few people are outraged that a human is sitting on the back of another being in the first place, although everyone should be. Many people recall the horror of the annual Grand National from the time they first witnessed it as small children. It is the epitome of violence to see horses being raced in such a hyperaroused atmosphere. Witnessing them being hurt is utterly sickening to anyone with a shred of moral decency. This is an innate repugnance for violence, a part of our conscience, our moral development, that we have forgotten.

If you listen to the conversation about these incidents you will hear phrases and sentiments such as ‘most people are upset when an animal dies’, ‘animals deserve respect’, ‘I was crying when I saw the photo’, ‘I am outraged to see someone do this to an animal’. If people are as outraged as they claim, they should boycott the horse racing industry. Much of the outrage is an example of speciesism. Discrete acts of animal cruelty or disrespect against individual members of one species (horses) are regarded as being more significant that the standard, legal practices that we routinely use on the billions of other animals we exploit and kill so that we can use their bodies as food and clothing, or experimentation. Horses do not feel any different to chickens, cows, sheep, fishes, and pigs. They do not value their lives any more than any other animal.

Let’s extrapolate from these statements about individual horses to our use of all animals. People are narrating their reaction because these incidents that represent a reprehensible and violent industry have been made public. So, we wonder what the reaction would be if the media carried photos of the standard legal practices that are perpetrated on billions of animals from their conception throughout their short lives to their deaths in slaughterhouses, practices that are paid for, sanctioned and supported by non-vegans every time they take out their money and pay for eggs, dairy, flesh, fish, leather, silk, down, or cosmetics and cleaning products that contain animal products or were tested on them? We have some idea about public reaction from peoples’ responses to our Go Vegan World ads and information. Many people are horrified to see what they have been paying for, they do the research for themselves and decide that they no longer want to participate in the horror of animal use and go vegan. Others defend it, clinging desperately to the myth that there is a morally acceptable way to breed other animals into this world so that they can be killed to cater for our taste, convenience, tradition and profit. The media, in particular, likes to sensationalise the issue pointing the finger at the messenger who dared to give us a glimpse of our victims. The problem is not the isolated photographic evidence of the exploitation of animals in the racing industry, or any form of animal-using entertainment, or the animals who are farmed and killed. The problem is that our unexamined, thoughtless, non-vegan habits, and our money, facilitates them being bred, owned, controlled, exploited and killed. We don’t like ourselves when the consequences of our actions are reflected back at us. We hear the hypocrisy of being outraged at the disrespect shown to a horse who is already dead, but defending the use of torture to make them run faster for our entertainment. We realise how ludicrous it is to cry over these two horses yet pay for their entire lives to be used for the purpose of our entertainment when we support the horse racing and breeding industry.

Think about it. The real problem is not ‘cruelty’ to these individual horses; it is the use of all animals by humans when it is entirely unnecessary for our health or happiness. The real problem is our belief that we are better than them when there is no factual evidence to back this up and even if there were it would not entitle us to do what we do to them or regard their lives as being of no value to them. The real problem is the myth that because they are different to us, we are entitled to own them and use them, profit from them, do as we wish to them, and kill them as if their lives only matter when they are of value to us.  We all know this is wrong.