Skip to content
We Must Restore Native Forest on Land Used for Grazing to Meet Climate Goals, Confirm Harvard Researchers

Earlier this month a report was published by Harvard Law School in which researchers show that we could repurpose UK land in a way that slashes our greenhouse gas (GHG) emissions and removes significant amounts of carbon dioxide from the atmosphere, greatly increasing our chances of meeting our climate change commitments, while at the same time producing enough food for everyone. How? By reforesting land currently use for grazing.

As is hopefully becoming increasingly clear to us all, we are already living in a climate crisis. The worst effects are being experienced right now by those who live in more exploited countries, by the people who did the least to cause this crisis. Our (those of us who live in richer countries) historic and ongoing contribution is huge, and we must recognise that in terms of our corresponding responsibility. We must do everything we can, individually, in communities, and at a policy and governmental level, to reduce our GHG emissions and increase our carbon capture. This report sets out a very significant step we could take, and one we must take.

We don’t need to wait for technological carbon capture solutions, we don’t need to persuade profit-hungry companies to change; we can decide to reforest our land, much of which once hosted flourishing, dense woodland with all the layers of life and greenery within. We could bring back these natural lungs of the earth, to greatly improve our carbon capture, reaping at the same time the other benefits of restoring woodland in terms of biodiversity, free-living animals and our own connection with nature. 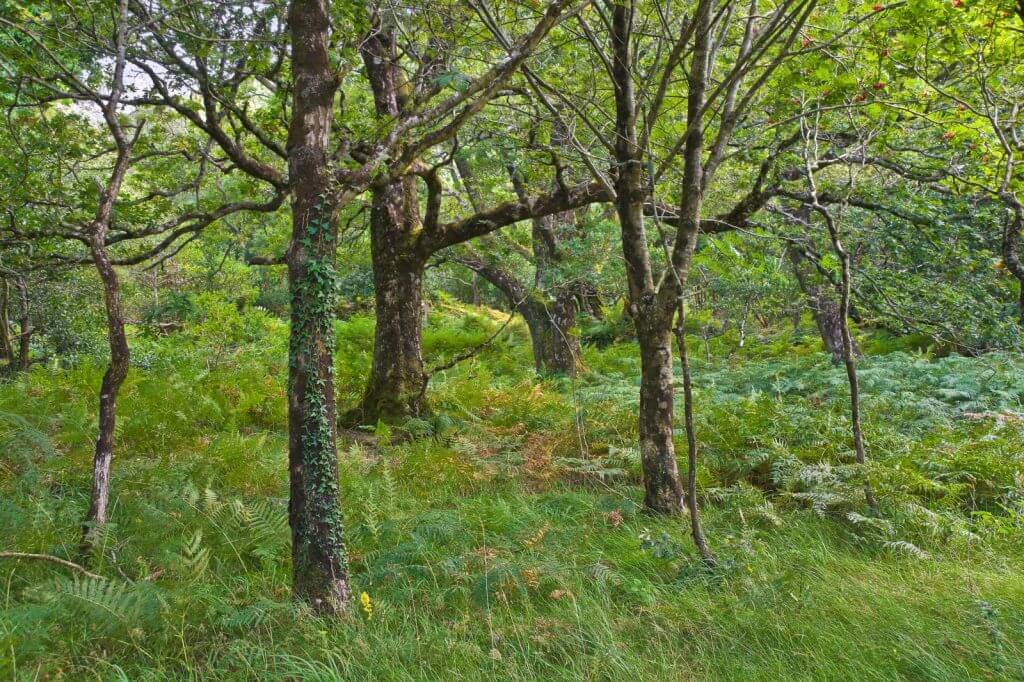 In order to return land currently used for grazing to woodland, we need to stop using animals. People who are not vegan may initially baulk at this suggestion, but report after report has confirmed that if we’re to have any hope of ceasing our destruction of the planet, and all who live on it, we must switch to plant-based production and consumption.

We don’t have any option at this stage. In the face of the ever-increasing evidence that animal use is one of the greatest, if not the greatest, cause of environmental destruction, we cannot prioritise frivolous self-interest in terms of taste, convenience or habit. It’s time we faced up to the necessity of this and worked together to look at how we implement it.

In the following paragraphs we explain the key findings set out in the report. While the report is specific to the UK, the approach could be applied in many other countries. Ireland, for example, is similar in many ways to the UK.

In Eating Away at Climate Change the researchers point out that “the UK is not on track to meet its legally binding commitment to reducing greenhouse gas (GHG) emissions by 80% by 2050 under the UK Climate Change Act, and even further reductions would be required to align with the 1.5⁰C aspiration of the Paris Agreement.” The Paris commitments themselves “fall short of the reductions required.” This is not about a technical legal failure; if we do not make rapid and bold changes we will continue to push global temperatures above a 1.5⁰C increase, and indeed to more than 2⁰C above pre-industrial temperatures. As the researchers point out: “Radical action, far beyond that currently planned, is required to reduce GHG’s steeply and in line with the Paris Agreement.” They note that “To limit or avoid temperature rise overshooting 1.5⁰C, global carbon dioxide (CO²) emissions must decline by about 45% from 2010 levels by 2013 and reach net zero by around 2050.”

Limiting warming to 1.5⁰C requires not only that we address our GHG output, but also carbon dioxide removal from the atmosphere (CDR). The researchers note that: “The most readily deployable CDR option at scale in the UK is the restoration of its native forest.”

The report points out that “animal agriculture” is the biggest land user in the UK. “The UK has a total land area of 241,930km². Animal agriculture occupies 115,900km², 48% of the total”. This is made up of the land on which the animals live and graze, plus land used to grow crops that are fed to those animals.

The UK has 84,000 km² of permanent pastureland, or grassland on which animals graze. This land is kept as grassland, as opposed to forestry, in order to feed animals. 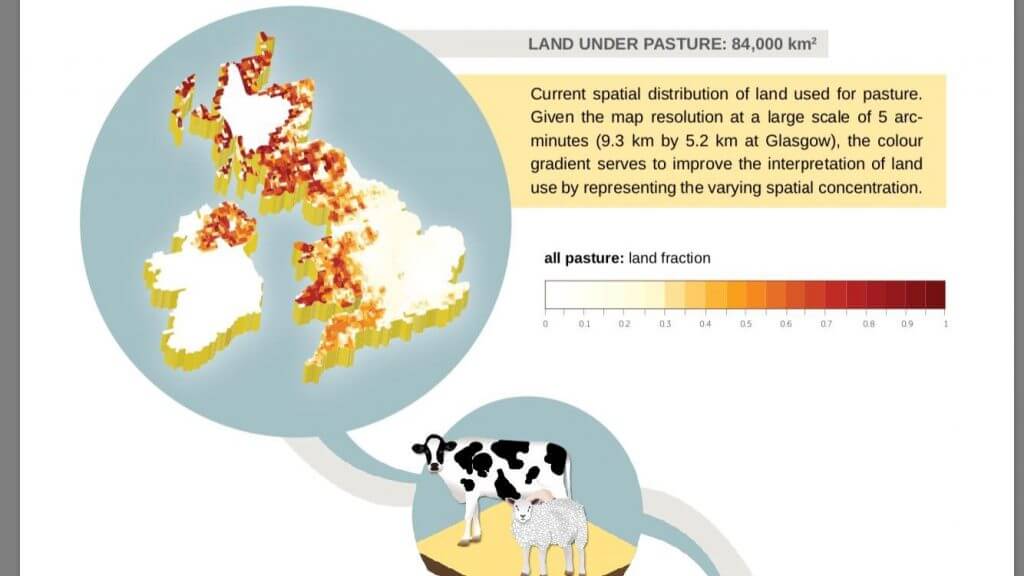 Eating Away at Climate Change, page 8

If we stopped using animals, we could repurpose this land for forestry. We would thereby achieve carbon dioxide removal of 3,236 Mt CO², which is 9 years of our current CO² emissions. 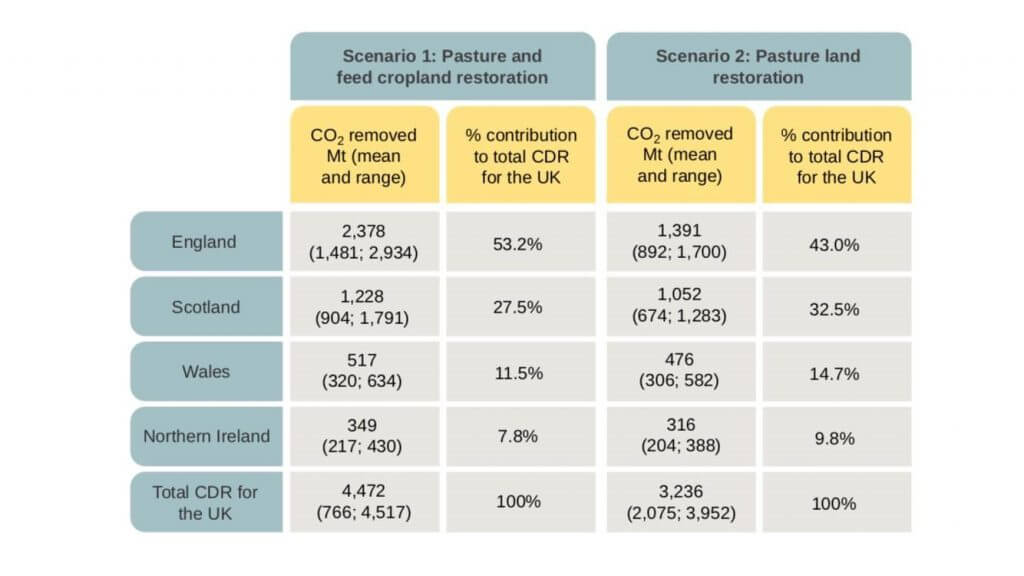 Eating Away at Climate Change, page 11

The following illustrates the carbon uptake from restoring all UK pastureland currently used for animals. It also gives an impression of the swathes of restored woodland we could have if we stopped using animals. 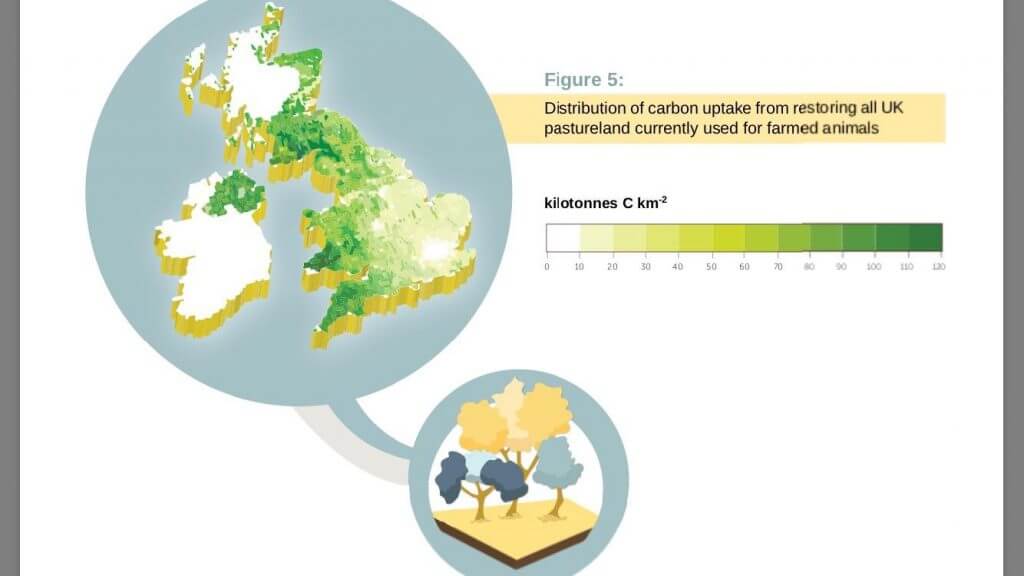 Eating Away at Climate Change, page 11

If we stopped using animals for food we would reduce our GHG emissions hugely, as well as reaping the significant benefits of carbon capture through reforestation.  The report does not include analysis of the reduction of GHG resulting from us no longer using animals for food, and therefore this benefit must be added into consideration of the proposal. The researchers noted: “Our analysis assessed CDR potential from agricultural land use shifts and did not quantify the reduction in GHGs that our scenarios would deliver in addition to the CDR – such as methane and nitrous oxide from ruminant digestion and animal manure”.

The report confirms that if we took animals out of the food system, reforested grazing land and repurposed crop land currently used to grow food for animals, we could produce enough food for the current UK population of 66 million and for a growing population, following nutritional guidelines and using an average of 2,587 calories and 70 grams of protein per person a day. By growing greater quantities and a greater variety of fruit and vegetables we would also meet our micronutrient requirements.

Currently a total of 55% of UK cropland is used for animal feed. Only 45% is used to produce crops for human food. 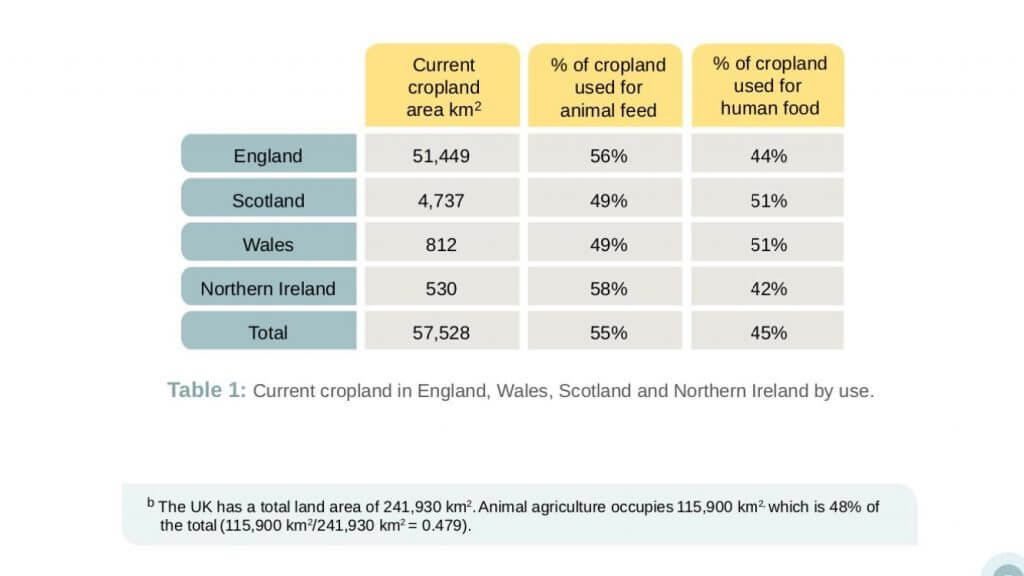 Eating Away at Climate Change, page 7

If we repurposed that 55% of cropland to grow more crops for human food, we could produce far more food in terms of calorie output from that same land. This is because of the losses involved in producing animal-based foods. For example, 1 calorie of “beef” takes 37 calories of plants, whereas we could be making use of that 37 calories by eating the plant foods directly ourselves. If we repurposed this crop land for human food we could grow more protein crops, fruits and vegetables, reducing our dependence on imports and increasing our food security. In terms of food security and imports, the researchers note that: “UK farming currently provides less than 50% of food eaten in the UK (by value)” and “90% of fruits and vegetables consumed in the UK, by value, are imported.”

The researchers noted that: “Reconfiguring food systems to grow crops directly for human consumption therefore allows for a higher production of health promoting foods, such as fruits, vegetables, pulses, nuts, seeds and whole grains. In addition to reducing food related GHG emissions by 70% and land used for food production by 76%, shifting food systems from animal-based to plant-based can actually increase, not decrease, the protein supply.”

They note that “crop production in the UK is currently dominated by only 7 crops, which take up 91% of UK cropland…wheat, grass/other forage, barley, rapeseed/canola, sugar beet, potatoes and oats.” Some of the crop currently fed to animals could be reallocated to humans, such as oats which are “a nutritious, fibre-containing, whole grain that have a variety of uses as a whole ingredient, or can be used in value-added products such as oat milk.”  They note that shifting some of the land to fruit and vegetables would increase micronutrient provision, improving again our food security and reducing dependence on imports. In the following table they illustrate how much food could be grown on just 1% of the cropland currently used for food for animals (1% of 31,640 km², 316 km²), using examples of fruit and vegetables already grow in the UK. The amounts are vast. 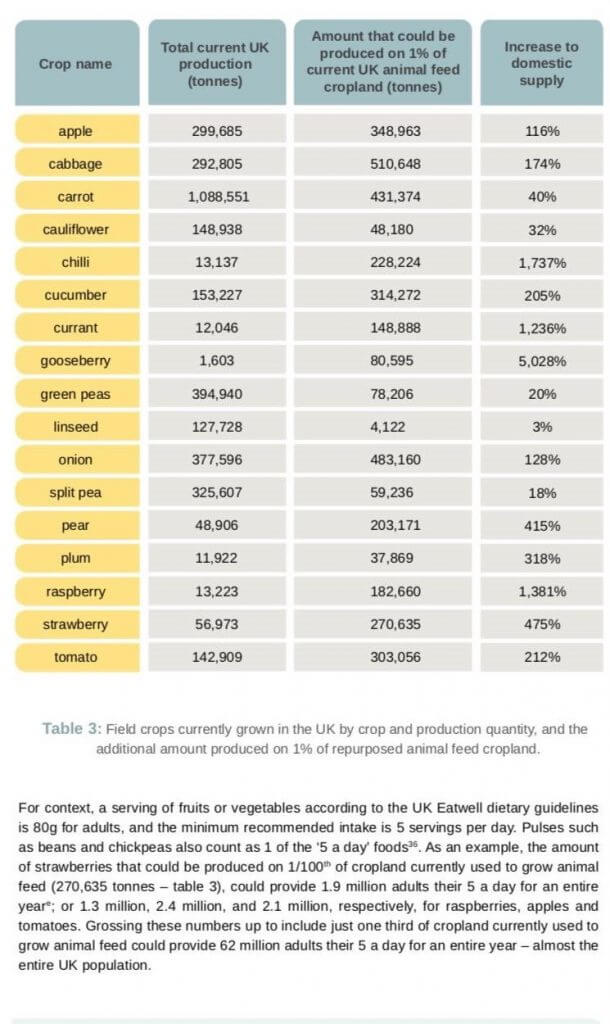 Eating Away at Climate Change, page 14

In the following table they give some examples of fruits and vegetables not currently grown in the UK in significant quantities, again showing the volume that could be grown on just 1% of the land currently used for food for animals:

Eating Away at Climate Change, page 15

The researchers note that in addition to the huge benefits in terms of reduction of emissions and increase in carbon dioxide removal, their proposals also address nitrogen pollution. Animal use for food is “the largest contributor to nitrogen and phosphorus pollution (from animal manure and chemical fertilizers applied to farm animal feed crops), leading to eutrophication and ‘dead zones’,” and “In the UK, grasslands are the main user of nitrogen, with 425 kilo-tonnes applied in 2015. Permanent grassland used 73% of this amount.” They also point out additional benefits in terms of “water filtration, flood buffering, soil health, habitats for wildlife, and enhanced resilience to climate change impacts,” as well as public health and societal benefits.

We will benefit in so many ways if we stop using animals and reforest our land, but the benefits to us are not the main consideration here. Implementing this strategy is essential if we are to have any hope of meeting our climate goals and avoiding irreversible devastation on the planet.