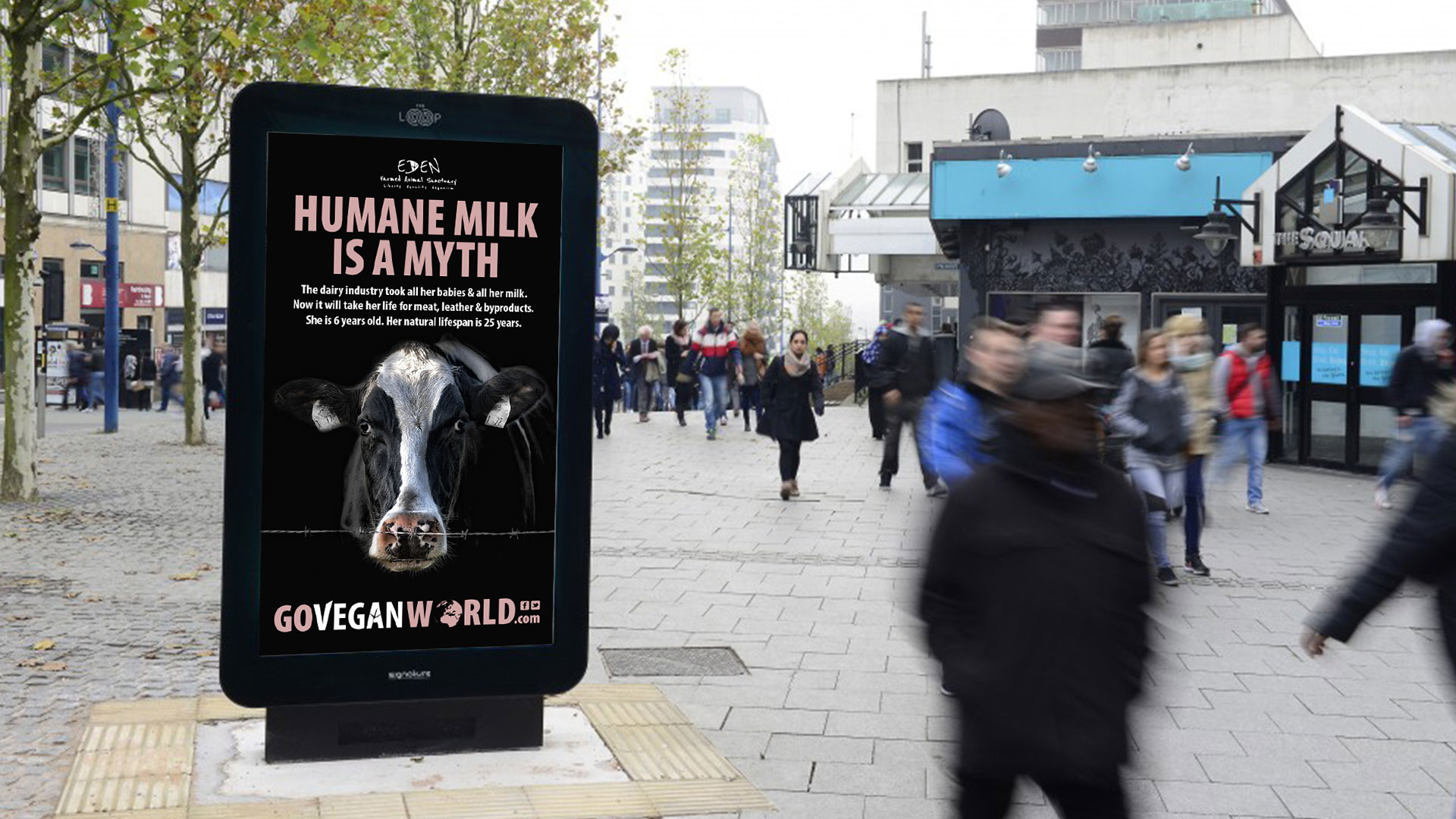 Dairy takes babies from their mothers

I went vegan the day I visited a dairy. The mothers, still bloody from birth, searched and called frantically for their babies. Their daughters, fresh from their mothers’ wombs but separated from them, trembled and cried piteously, drinking milk from rubber teats on the wall instead of their mothers nurturing bodies. All because humans take their milk. Their sons are slaughtered for their flesh and they themselves are slaughtered at 6 years. Their natural lifespan is 25 years. I could no longer participate in that. Can you? (Sandra Higgins, Founder & Director, Eden Farmed Animal Sanctuary, Ireland. Campaign Director, Go Vegan World.)

At its heart, dairy is the violation of reproductive capacity, sexuality, family and love. Like other mammals, including humans, cows produce milk following pregnancy and birth. In order to supply humans with her milk, a dairy cow is forced into repeated cycles of pregnancy, birth, and lactation.

Dairy originates at what used to be known in the industry as the ‘Rape Rack’*, beginning with the forced extraction of semen from bulls. This process involves restraining the ‘teaser’ bull by tying a rope to a ring in his nose, causing him severe pain if he attempts to move away from the ‘donor’ bull trying to mate with him.

Males, rather than females, are used in this position because of the rate of pelvic injuries caused to females. Semen is collected from the ‘donor’ bull and used to inseminate females in a process that would be classified as rape if it were done to a non-consenting human. AI involves restraint of females, also on a ‘rape rack’, penetration of the rectum as far as the cervix wall, and penetration of the vagina using AI gun. (Artificial Insemination training is conducted on live cows awaiting death at the slaughterhouse, because of the high risk of internal injuries.)

[*Term created by vivisectionist Harry Harlow for experiments on primates in the ‘Pit of Despair’, University of Madison, Wisconsin. These experiments are ongoing.] 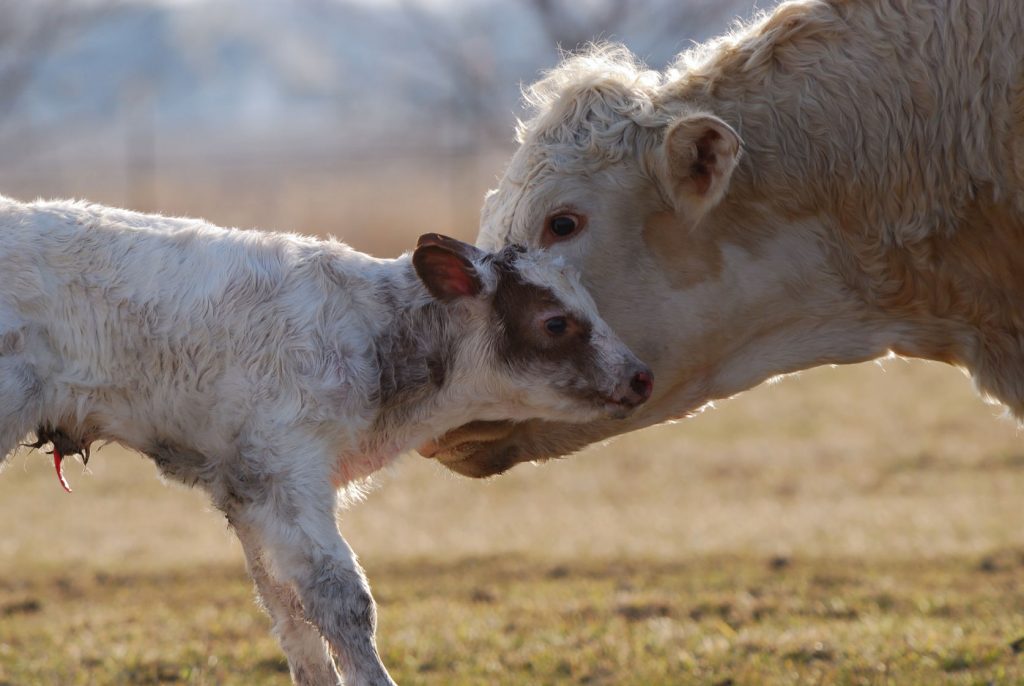 Like humans, pregnancy lasts nine months for mother cows and their calves

Cows are milked for 7 of their 9 month pregnancy. After birth, her calf is taken from her, and the milk she produced to feed him goes into the dairy industry for human consumption.

The mother-child bond is just as strong in cows as it is in humans. This separation of mothers from their children, on the basis that they are members of a different species, is grossly unjust.

The natural lifespan of a cow is about 25 years. By the time they are 6 years old, dairy cows are physically shattered from repeated pregnancy and lactation, and are slaughtered for meat consumption.

Exploitation and grief are no less significant in goats and sheep who are frequently used by the dairy industry.

“Increases in milk production have been at the expense of the health and well-being of cows, corresponding with an increase in production and metabolic diseases, decreases in fertility and culminating in the culling of cows at a younger age. The cause of some of these detrimental effects are attributed to a syndrome referred to as metabolic stress, which is considered to be prevalent in modern, high-yielding dairy cows.”

“It was concluded that (1) temporal weaning induces severe psychological stress in cattle, and preventing any sensorial contact between mother and young within this period resulted in a less stressful situation in zebu-type calves, and (2) calf-cow reunion reduced behavioral signs associated with stress and induced calves to suckle and remain standing close to their mothers.”

“After separation, calves in the late-separation group moved and placed their heads outside the pen more often than early-separation calves. During the first 14 days after birth, late-separation calves gained weight at more than three times the rate of those separated early. When introduced to an unfamiliar calf at 6 weeks of age, calves from the late-separation group showed more intense social behaviour towards the unfamiliar calf than did those calves separated early. Thus, the response to separation by both cows and calves increased when calves were separated at 2 weeks rather than 1 day of age, but calves separated at the later age gained more weight and delayed separation appeared to influence the development of calf social behaviour.”

“The dairy cow is exposed to more abnormal physiological demands than any other class of farm animal”, making her “a supreme example of an overworked mother”.

“…a depressing number are culled after only two to three lactations because they are worn out, either through complete loss of body tissue (emaciation), or breakdown of the udder tissues, or chronic lameness.”

A strong mother/infant bond is formed between cow and calf within the first few hours of birth, making their separation extremely traumatic.

Both the cow and calf bellow and show obvious signs of distress when they are separated, often continuing for several days, leaving those within earshot in no doubt that it is a harrowing experience for both

Cows are re-impregnated three months after their calves are born and removed so that they give birth on average once a year. National Animal Disease Information Sheet: Fertility in Dairy Herds Part 8 – Measuring fertility – Benchmarking your farm. http://www.nadis.org.uk/bulletins/fertility-in-dairy-herds/part-8-measuring-fertility-benchmarking-your-farm.aspx. (Accessed February 2017).

The average number of calves born per cow per year in Ireland in 2016 was .09. This means that cows are impregnated and give birth to an average of one calf every year or so.  Irish Cattle Breeding Federation 2016 Report https://www.icbf.com/wp/wp-content/uploads/2017/01/Dairy-Calving-Stats-20161.pdf  (Accessed February 2017)

Cows have, on average, three calves during their lifetime before they are slaughtered. Irish Cattle Breeding Federation 2016 Report https://www.icbf.com/wp/wp-content/uploads/2017/01/Dairy-Calving-Stats-20161.pdf  (Accessed February 2017).

The removal of her calf is the “most potentially distressing incident in the life of the dairy cow” Webster, J., 1987. Understanding the dairy cow. Oxford: BSP Professional Books