There is a persistent myth in Scotland, that we have no option but to continue to use animals for food because most of our land is not suitable for anything else. This myth operates as a serious hindrance to honest discussion about land use and the future of food production in Scotland. Instead of looking at the facts and being led by science, the Scottish Government pedals this myth alongside the meat and dairy industries. That is unsurprising given that the meat industry, in the form of Quality Meat Scotland, is part of the Scottish Government. How can we expect our government to consider food production and land use objectively, when an industry with a financial interest in the sale of animal products is a government entity? We must excise business from government to have any hope of achieving a society in which decisions are made for the good of all, rather than for continued profit for a few.

The claim that most of Scotland is not suitable for growing food, and so we must use vast amounts of land for grazing, is regularly cited by the meat and dairy industries. For example, the National Farmers’ Union claimed in an article in The Scottish Farmer on 16 October, UK Industrial Farming Slur, that “85 per cent of [land] in Scotland is Less Favoured Area and only suitable to grow grass and graze livestock,” while the chief executive of Quality Meat Scotland (“QMS”), Alan Clarke, commented: “grass and rough grazing which make up around 80% of Scotland’s agricultural land and could not be used for cereal, fruit or vegetable production.”

QMS is a government entity, set up by the Scottish Government under a Statutory Instrument, funded by a statutory levy, and required to report to the Scottish Ministers. Its statutory role is to advertise, promote and market the beef, lamb and pork products of the Scottish “red meat industry”. It is therefore not surprising that the Scottish Government speaks with the same voice on these issues. Roseanna Cunningham MSP, Cabinet Secretary for Environment, Climate Change and Land Reform, has repeatedly made these same claims, for example, in this letter replying to concerns raised by a constituent who sent one of our posts to their MSP: 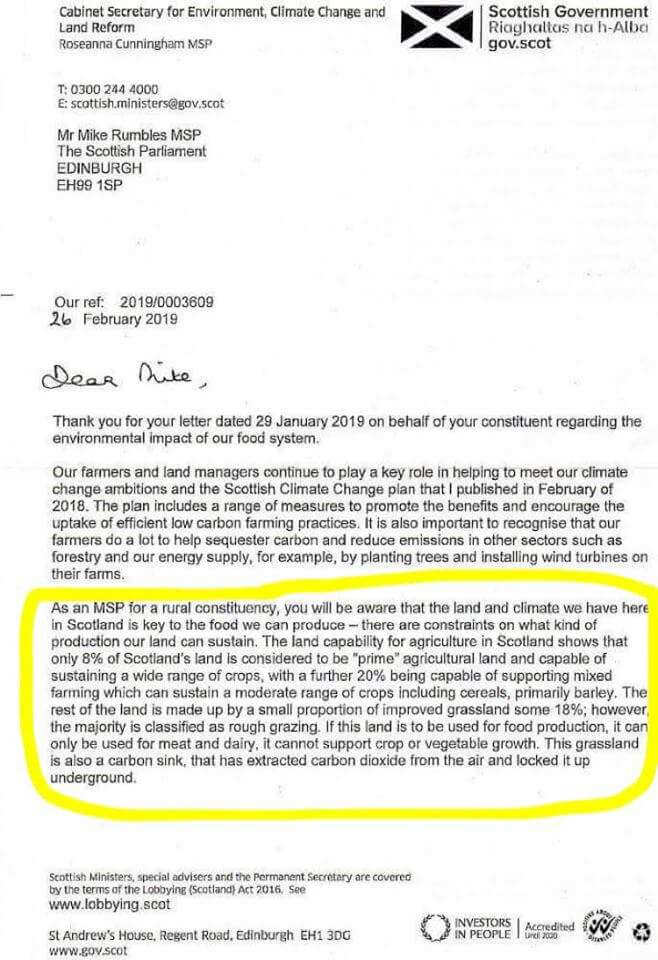 There are doubts about the land use classification referred, as it dates back to the 1980’s and much has changed since then in terms of climate, knowledge about growing techniques and land assessment. Accepting these figures for the sake of discussion, the key point that is overlooked is this massive caveat: “if this land is to be used for food production.” What if we didn’t use it for food production? What if we reinstated the vast swathes of native woodland that were cleared hundreds of years ago for grazing? The benefits would be manifold: restoring the natural habitats of free-living animals, with the many layers of life found in established woodland, from the birds and squirrels in the branches, to the deer, badgers, foxes, butterflies, frogs and insects down below, and the worms, ants and others in the soil; the carbon captured by the woodland; the increased proximity to nature for Scottish people with all the mental and physical health benefits that can bring, to name a few.

But, how would we feed ourselves if we restored the woodland habitats that once blanketed much of Scotland? We’re constantly told we would starve if we removed animals from our food system. For example, writing in The Times on 2nd October, 2019, Joanna Blythman, said to have written books about food and farming, claimed that “Going vegan would be disastrous for Scotland and lead to food shortages and hunger.” Nothing could be further from the truth.

A Plant-Based Scotland Would Thrive

In fact, if the population of Scotland was to switch to fully plant-based production and consumption we could feed everyone, meeting all nutritional targets, be much more self-sufficient and far less dependent on imports, improve health, reduce the health-care budget, dramatically improve our natural environment, slash our greenhouse gas (“GHG”) emissions and vastly increase carbon capture through reinstating our native woodlands.

Sound too good to be true? A report published in April by researchers at Harvard University, Eating Away at Climate Change with Negative Emissions, Repurposing UK Agricultural Land to meet Climate Goals (“The Harvard Report”) pointed out that “animal agriculture” uses 48% of UK land. This is made up of (i) the land on which the animals live and graze, and (2) land used to grow crops we feed to those animals. In Scotland 49% of available cropland is used for animal feed, only 51% is used to produce crops for humans.

The report confirms that if we took animals out of the food-system we could repurpose cropland currently used to grow food for animals to grow more food for humans. We could produce enough food for the current population and for a growing population, following nutritional guidelines. By growing greater quantities and a wider variety of fruit and vegetables we would also meet our micronutrient requirements.

The vast swathes of land currently used for grazing could then be returned to native woodland, to the benefit of all, both humans and the other animals who live in native woodland. In terms of climate change, not only would we eliminate the GHG emissions from animal use, we would achieve carbon dioxide removal of 3,236 Mt CO², which is 9 years of current UK CO² emissions.

An honest, objective discussion of land use and food production would include close consideration of the Harvard Report, yet we’ve heard nothing from the Scottish Government on this. The Scottish Government declared a climate emergency and said it would be led by recommendations from the UK Climate Change Committee (“CCC”). The CCC commissioned a report Behaviour change, public engagement and Net Zero, October 2019, which has recommended a shift towards plant-based production and consumption, calling for regulations requiring that plant-based options be included in every public canteen every day. So far there has been no response to this from the Scottish Government. Meanwhile the Scottish Parliament Petition Committee quietly dropped consideration of a petition organised by Go Vegan Scotland/The Vegan Society, calling for plant-based options in all public canteens which had garnered over 8,000 signatures, one of the most widely signed Scottish Parliament petitions.

Instead of taking account of the latest factual information, on land use, on the environment and climate change and on human health and nutrition, the Scottish Government, through QMS, is running advertising campaigns designed to encourage the consumption of animal products, Meat With Integrity. Businesses should not be part of government. This is a blatant conflict of interest. How can we have any faith in our government making objective decisions about land use and food production while animal-using industries which use half of our available arable land to feed those animals, is part of our government?

If the Scottish Government is adamant that animal-using food production should be part of government, then shouldn’t other food production industries receive the same level of government backing? Grain, vegetable, fruit, pulse, herb and spice farmers produce food for humans, and the food they produce is essential for human survival (unlike animal products). Where is the government support for them, where is the hard-hitting ad campaign, where is the special subsidy support to assist in establishing a Scottish oat milk company?

If you agree, please send our piece to your MSP and ask them to confirm:

You can find your MSP here: https://www.parliament.scot/msps.aspx