“Every animal used in research is bred to be used and then killed. To the animal who had one life and whose only life has been taken from them, they have lost everything.
Using other animals as research objects constitutes institutionalised killing, despite the fact that death is no doubt a mercy for the individuals who are
deemed to have reached the end of their usefulness to research.”
– Sandra Higgins, Director, Go Vegan World.

The Advert and Complaint

The ASA decision followed a complaint about a Go Vegan World public information advertisement on a UK bus featuring a mouse holding onto a human hand, accompanied by the text “They Trust Us, We Torture Them for Research”. 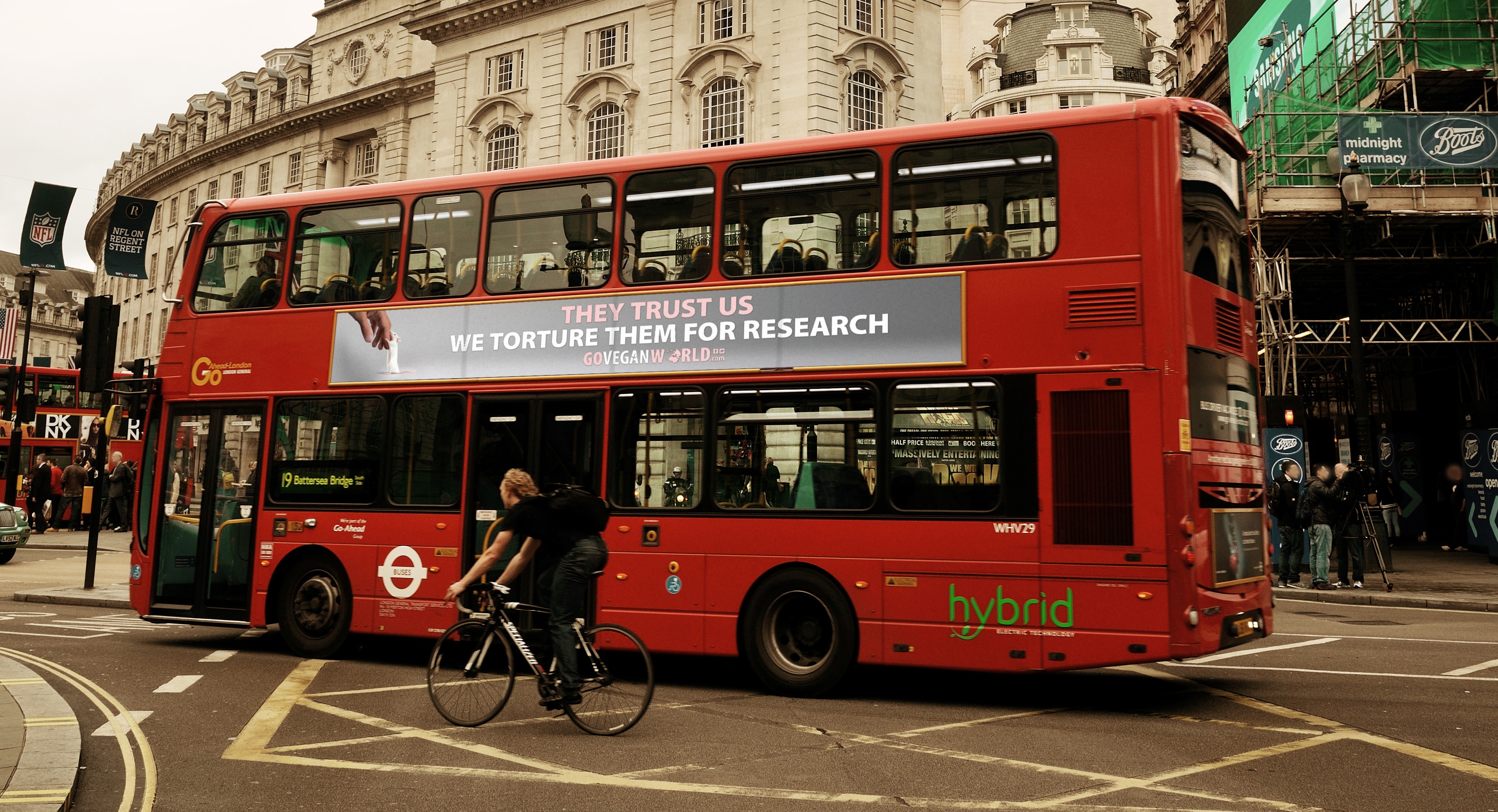 A medical scientist asserted that it was misleading to say that we torture animals for research, because “scientific” research is regulated in the UK. However, Go Vegan World provided the ASA with evidence of the millions of animals who are tortured for research in the UK every year, even according to official statistics and legislative definitions.

The ASA agreed with Go Vegan World that there was sufficient evidence to support their use of the word “torture”.

“Animal experimentation is the stuff of nightmares. We should not support it, any more than we should support killing other animals for food or any other use.

Research shows that most people disagree with frivolous experiments that cause harm, but they imagine that the torture of a non-human is justified when it benefits the life of a human. Many believe that experiments conducted on animals in the UK are necessary to address life-threatening human conditions; that is not the case. In fact, most experiments are unreliable because the results are not applicable to humans. Many of them are conducted for frivolous reasons and lack scientific validity. A 2017 analysis by the British Medical Journal cited a “systematic failure” to faithfully report the results of animal tests in order to secure funding and permission for human trials. Even in cases where there is a benefit to humans, we are morally obliged to find alternatives that do not involve using other animals.”

One of the reasons that animal testing is not a topic with which the average person is familiar is because it is shrouded in secrecy that hides duplication, frivolous objectives, negative results and the torture of vulnerable, sentient animals. Of the information that is public, Go Vegan World’s submission to the ASA showed that

Go Vegan World does not support the use of other animals in experimentation for any purpose, as the interest of another animal to be free from torture, not to be used as an object for human ends, and not to be killed, should not be disregarded in favour of human interests.

Sandra Higgins of Go Vegan World commented on the ruling:

“Most people are against torturing animals. If we are opposed to torture, we should refuse to support it. If we buy products that have been tested on other sentient animals or that contain “ingredients” taken from their bodies, we are paying others to use and kill them for us. That is the case for cosmetics and household products, but it is also the case for food, clothing, entertainment and all the other ways in which we use them as objects.

Refusing to participate in the exploitation and killing of other animals is what it means to be vegan. For the most part, it is very easy to find products that are vegan friendly. However, at the moment our law requires that all medication be tested on animals. This must be changed. Experimentation on animals is morally wrong, does not produce useful data for humans and there are excellent alternatives that do not involve torturing other animals.

For more information on living vegan see our website goveganworld.com”

The Go Vegan World advert is one of several public information advertisements in the campaign, which draw attention to the ways in which we use other animals unjustifiably. In this advert the viewer is reminded that we are torturing millions of animals every year in the UK and elsewhere and prompted to reconsider whether experimenting on animals is justified. They are directed to the www.goveganworld.com website for more information where they will learn about charities such as Animal Free Research UK (formerly the Dr Hadwen Trust) that are dedicated to alternatives to the use of other animals in research.

This is the second time the ASA ruled in favour of a Go Vegan World ad. As with the previous ASA decision in relation the public information advertisement on the injustice of dairy production,  this decision supports the Go Vegan World campaign. The campaign does not call for improved welfare regulations, but instead for the complete end of the oppression of other animals simply because they are not human.

Go Vegan World pointed out that:

“It is worth remembering that every animal used in research is bred to be used and then killed. To the animal who had one life and whose only life has been taken from them, they have lost everything. Using other animals as research objects constitutes institutionalised killing, despite the fact that death is no doubt a mercy for the individuals who are deemed to have reached the end of their usefulness to research.”

Go Vegan World comments that “this independent, legal finding substantiating our ad, is hugely significant for animals used in laboratories and for the rights of all animals used as objects for human ends.”