In January 2020, the public body responsible for bus transport in Northern Ireland (“NI”), Translink, refused to run Go Vegan World’s ads, claiming they would lead to complaints. We have successfully challenged that refusal as an unlawful interference with our legal right to freedom of expression. In the face of our legal challenge Translink has reversed its decision and has accepted the same set of educational ads, which we are delighted to report are now being displayed on buses across Belfast.

One of the ads which states It Is Not a Personal Choice When Someone is Killed, features Cormac, a bull who was rescued from the Irish dairy industry and lives at Eden Farmed Animal Sanctuary. The ad reminds members of the public that using other animals is not a personal choice because when we use them, they lose their lives. 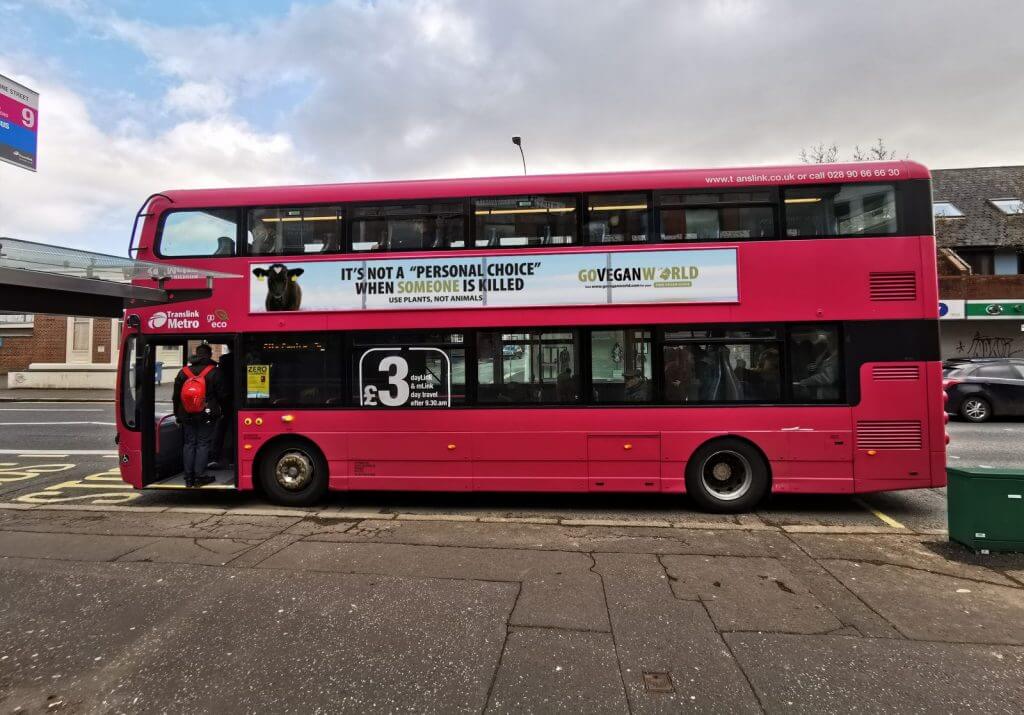 The other ad states ‘Dairy Takes Babies from Their Mothers’, reminding the public of the price other animals pay when we use dairy and create a demand for cows or other mammals to be impregnated and give birth only to have their newly born children taken from them so that we can drink the milk produced to feed them. 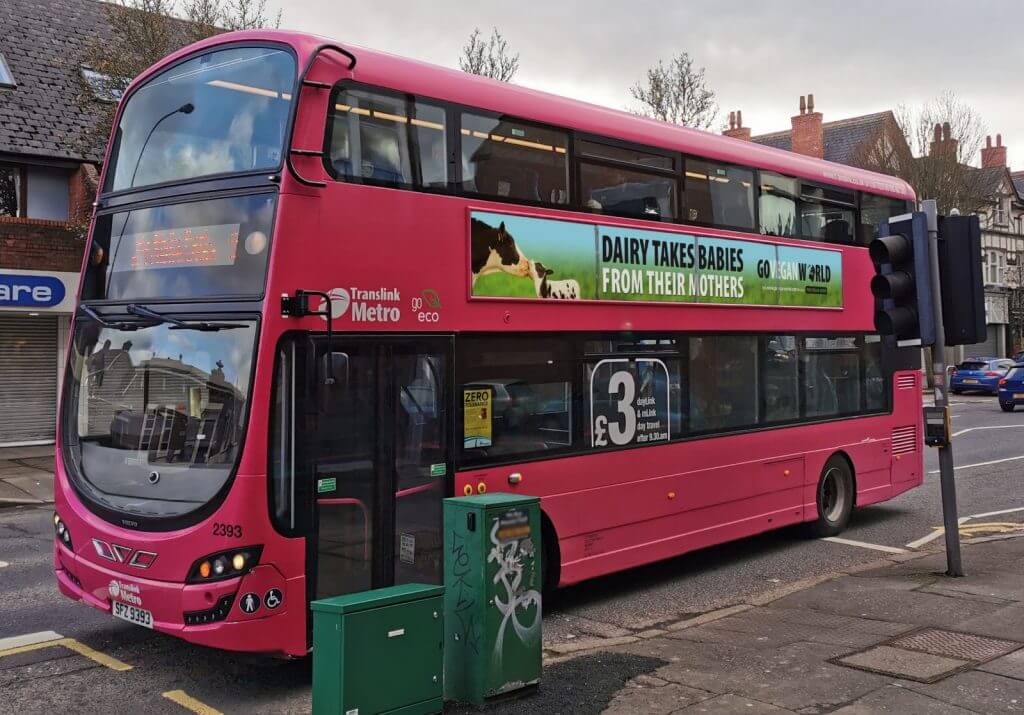 We ran our ads on Translink buses in January 2020. On 17 January the Ulster Farmers Union (“UFU”) issued a press release in which they stated that their members were outraged that our ads were on Translink buses.

In particular, the farming lobbies claim to object to our use of the word ‘babies’ to describe the day old calves who are taken from their mothers in the dairy industry. GVW Founder and Director, Sandra Higgins states that

“This a lame and speciesist objection. Humans are not the only mammals or animals to have babies. To every mother cow, her calf is her baby. To every sheep, her lamb is her baby. To every hen, her chick is her baby. The true objection of the farming lobby is the reluctance to be reminded that other animals have children and relationships and feelings as humans do and that it is wrong to breed, use and kill them for profit. The fact is our ads make them uncomfortable and ashamed of their livelihoods.”

The NFU also claimed that our ads “demonised” farmers to promote veganism. In fact, our ads do not demonise farmers or target them in any way, instead they draw attention to the sentience of other animals and the injustice that is inherent in their use and killing for food and other purposes.

Nevertheless, Translink was quoted in the press as stating that it was “sympathetic” to the concerns raised by the UFU and that our ads were being removed. It appeared that Translink had removed our ads early (albeit after expiry of the initial contractual period) to appease the UFU. We wrote to Translink seeking confirmation of their position but received no response.

When we placed an order to run the same ads on Translink buses in February, Translink’s advertising agent, Exterion Media, advised on Translink’s behalf that our ads were refused, claiming:

“The proposed designs have been rejected as in our opinion we considered them to be overtly emotive & provocative, and they presented a risk to us and Translink arising from complaints.”

Translink rejected our ads outright, apparently on account of the UFU’s complaints about our previous campaign.

Our Right to Freedom of Expression

Go Vegan World’s legal counsel, Barbara Bolton, explains that a public entity such as Translink, which is selling advertising space, must do so in compliance with applicable human rights and equality laws including the right to freedom of expression, which applies to individuals and corporate bodies.

Interference with the right to freedom of expression is lawful only if the restriction is in furtherance of a legitimate aim, necessary in a democratic society, i.e. justified by a “pressing social need,” and the restriction is proportionate to achieving that legitimate aim. The reasons provided by Exterion for refusal of our ads do not meet this test. Avoiding complaints from those involved in the animal-using industries is not a “legitimate aim” in relation to quashing freedom of expression, and the fact that our ads may elicit complaints from those industries does not create a pressing social need to prevent them from running.

Our educational ad campaign is central to our work and we take any refusals to run our ads very seriously. It is critical that we are able to bring to the public the information that it is their right to know, drawing attention to the moral rights that apply to all animals, not to be owned, used or killed.

We therefore challenged Translink’s rejection of our ads as an unlawful interference with our right to freedom of expression, noting that we may have to raise court proceedings should they persist in their refusal to accept our ads. In the face of this challenge Translink reversed its rejection of our ads and confirmed that they would be accepted. We are delighted to confirm that the same ads as were previously rejected are right now displayed again on Belfast buses.

“The outcome in this case means that we can continue with the essential work of Go Vegan World in NI, informing the public about the rights of other animals and directing them to our website for assistance in making changes in their lives so that they are no longer directly participating in animal exploitation.”

“A key area of our work involves using legal protections that are available to humans to advance the moral rights of non-human animals, which are not yet recognised in law, and this is an example of that work.”

For more detail on Translink’s removal of our ads see our previous posts:

For more details on the legal rights of vegans see: https://goveganworld.com/vegan-rights/

For more detail on our educational ad campaign and some of the issues we have overcome see: